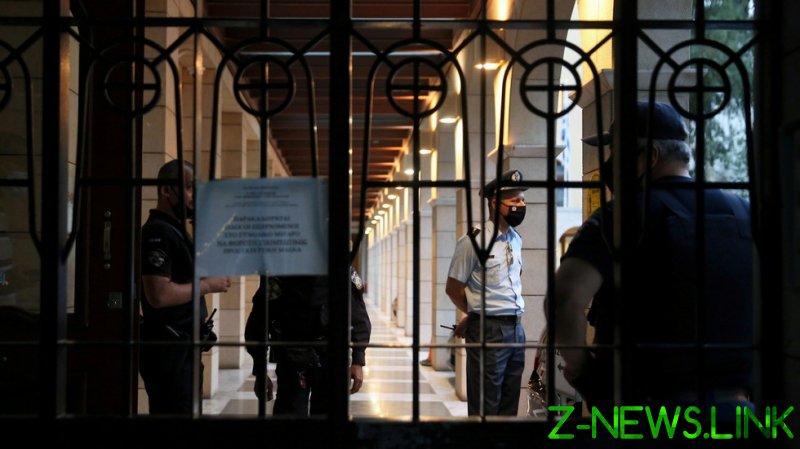 The bishops and their attacker were having a meeting on Wednesday at the Petraki monastery in Athens, which headquarters the Holy Synod of the Greek Church. The gathering was convened as the priest had been accused of several offenses, including alleged possession of drugs, and was most likely to result in his defrocking.

“We were sitting in line in the big meeting room for Covid reasons, keeping a distance. A court secretary and the perpetrator with his lawyers were also present,” one of the bishops recalled while talking to local media. “When the decision was announced, he stood up on the bench and took out a glass bottle with brown liquid from his bag,” he added, saying that from where he sat – which was at a distance – he judged it to contain around two liters of liquid.

The suspect, said to be between 34 and 38 years old based on varying information, was reportedly ordained in Libya. He then moved to Europe to become a priest in a village near the city of Veria in northern Greece.

The former head of parish stands accused of various offenses, according to local media. After serving as priest for about a year and a half, problems started to emerge, with people complaining that he “borrowed” money from elderly locals and didn’t return it, cursed a singer during services, and had friends who “looked like people from the underworld,” the Skai media reported. He also reportedly threatened to kill the new village priest, and attacked journalists who filmed a culture report in his parish.

In 2018, the suspect was captured by local police while allegedly carrying cocaine under his robes. Syringes and drugs have also reportedly been found at his house. The cocaine was meant for “personal use,” the priest reportedly claimed at the time, adding that “it was a moment of weakness.”

The church then launched procedures for the troubled priest’s dismissal. They initially decided to defrock him; however, the suspect had the right to appeal, which he did. The bishops’ meeting on Wednesday was to make a final decision on the priest’s fate. Greek President Katerina Sakellaropoulou condemned the attack on Twitter, saying she was “disgusted with this unprecedented incident.”