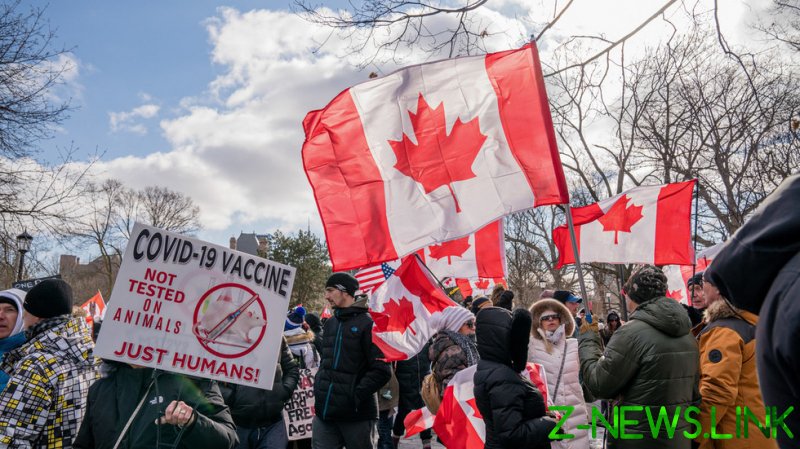 Along with Kenney’s signature, the letter is endorsed by 16 US state governors, including Montana’s Greg Gianforte and South Dakota’s Kristi Noem.

The letter demands exemptions be put back in place for truckers crossing the border for both vaccines and quarantine requirements.

“We are deeply concerned that terminating these exemptions has had demonstrably negative impacts on the North American supply chain, the cost of living, and access to essential products for people in both of our countries,” the letter states.

Kenney has been more cautious in his support of the Freedom Convoy protesters in the past, saying earlier this month that he agreed with protesters’ concerns, but some involved with the mass protests carry “extreme, potentially even hateful views.”

He added that demonstrators should “respect the rules of the road, not block roads, be safe and be respectful.”

Trudeau, who has said those involved in the protests hold “unacceptable views,” recently invoked the Emergencies Act, which gives the government and police officers more authority in disrupting the convoy’s financing, as well as breaking up “illegal blockades” at border crossings and in major cities, where police have been breaking up protests.

The anti-mandate protests in Canada have been going on for approximately three weeks. They began as truckers protesting their own specific mandates, but the demonstrations have grown in size and scope, with Trudeau’s handling of Covid and vaccine mandates in general being protested against. Despite pushback from authorities, protesters have continued to occupy major cities and areas, even recently closing down the Ambassador Bridge, a busy border crossing, until police dispersed the crowd.