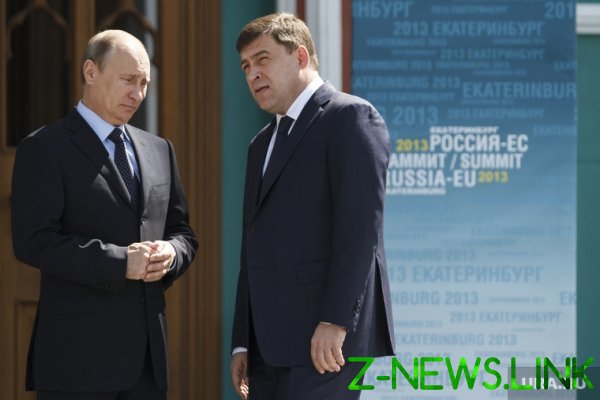 Russian business has sounded the alarm of the coming collapse in housing. Because coronavirus quarantine authorities withdrew the fines and penalties for late payment of utility bills, but we had the industry that provides residents of the country’s basic needs — heat, light, water. As it became known “URA.RU” the government of Russia is considering measures to support the housing sector. This problem is confirmed by the Governor: on Wednesday, the head of the Sverdlovsk region Yevgeny Kuyvashev appealed to the President of Russia Vladimir Putin with the request to take measures that will prevent a major crisis in a communal apartment.

“We ask you to consider the possibility to include housing and utilities sector in the list of sectors of the Russian economy most affected by the spread of the new coronavirus infection”, — said Kuyvashev at the meeting (via videoconference) with the head of state. This is not the first time the governors are trying to attract the attention of Vladimir Putin to the housing sector, previously with a similar request for public videoconferencing was contacted by the head of the Kursk region Roman Starovoit.

The attention of the governors is not accidental — because of the economic crisis and the cancellation of instruments of debt collection, the industry immediately found themselves in crisis. According URA.RU in the apparatus of the Deputy Prime Minister Andrei Belousov (heads the government Commission on sustained development of the Russian economy) and the Ministry of economic development of Russia, the Russian government is already discussing measures to support housing.

According to the insiders, if we do not prevent communal crisis in Russia may experience problems with the reliability of supply of utilities — electricity, water, heat and garbage removal. “According to forecasts in the second quarter collection rate for utilities will fall by 20%, and by the end of the year — 50%. This means that the increase in total debt will grow by at least 1 trillion rubles,” — explains the source of why the government is discussing measures to support housing.

In the housing works more than 2 million people, the industry annually pay about a trillion of taxes and fees. However, before the start of the pandemic coronavirus, according to the Ministry of the Russian Federation, the debts in this area amounted to 1.3 trillion rubles.

The interviewee said that because of the shortfall of payments in the sphere of housing starts of delay in the payment of salaries to workers of the industry and reduction of taxes and fees, and will be reflected on increasing the budgets of all levels. It is also possible to breakdown the investment and maintenance programs and campaigns in preparation for the heating season. “As a consequence of the increase of accidents and reduced reliability of supply of electricity, heat, water supply and sanitation to the residents, they begin to stutter with the garbage disposal. Moreover, companies will grow debts to suppliers of fuel, this can potentially lead to reduced deliveries to power plants that may lead to their stop, and will also affect related industries — the same “Gazprom”,” adds the insider.

In the Urals Federal district the Governor of Ugra Natalia Komarova decided that state institutions and municipal unitary enterprises need upfront to pay for utility services. The decision to advance payments by budget organizations resursnie and took the head of the Chelyabinsk region (where the debts for electricity accumulated by utilities in the first nine months of operation of a guaranteeing supplier, is already nearly one billion rubles) Alexey Teksler. There is also a reverse example — in the Kurgan region, the municipalities owed for housing more than 600 million rubles, which is the record among the Ural regions, and the government entity does not take any measures to repay the debt.

“The government consistently considers the industry, which faced challenges due to coronavirus infection and mode of isolation. In the municipal sector the situation is close to critical, according to the data, which come from the regions”, — said the Ministry.

According to the Executive Director of the Association of operators, organizations and experts in the field of waste management “Clean Country,” Ruslan Gubaidulina, the Federal government has allocated 9 billion rubles for regional waste operators in waste management. The money will soon go to the regions. Also, according to him, the agreement is the decision to subsidise interest rates on loans. “A required postponement of the payment of all obligatory payments by reoperation December 2020. We expect that in the summer the economy is working, and money will be collected from the receivables, which will allow the end of the year to pay all the bills. It is also necessary to set a zero VAT rate for reoperation” — said Gubaidullin.

Head of the Department of sociology “Higher school of Economics” Alexander Chepurenko believes that effective method can be direct government investment in housing. “The state could issue bonds to support the industry is that the funds to direct subsidies to the housing sector at least until the end of this year. It can smooth the decline of payments from the population”, — the expert adds.

Executive Director of the Guild of management companies in housing and communal services Vera Moskvina said that the industry could support the same decisions that have already been taken in other sectors of the economy. “Management companies can not compare with physicians, but they too are on the front lines, the employees risk their lives processing the entrances, especially where I live sick people. And for them it nobody pays. Need a tax break, you need to suspend scheduled and unscheduled inspections. Of course, to compensate from the budget the money that was spent on disinfection. And we also need to address the issue of subsidies. Now they get to homeowners, but need to list the management companies so they can have the money to pay for water, heat and light,” — said Moskvina.

URA.RU will monitor the situation.