Home / WORLD / ‘Got what he deserved’: Fans split after footballer is viciously kicked by opponent… only to be booked by ref in England (VIDEO)

‘Got what he deserved’: Fans split after footballer is viciously kicked by opponent… only to be booked by ref in England (VIDEO) 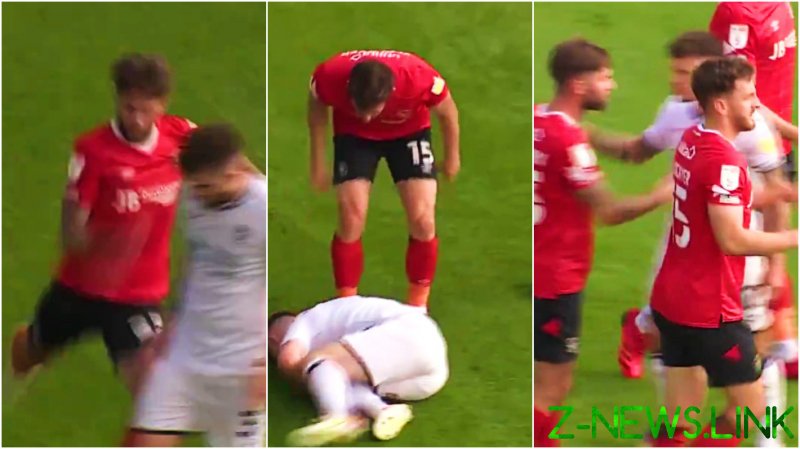 Swansea and Republic of Ireland ace Manning was apparently attempting some gamesmanship during Swansea’s 3-3 draw with Luton Town on Saturday – but former Arsenal academy prospect Henri Lansbury wasn’t having any of it.

In footage which has since been viewed more than 1.1 million times from the Championship fixture, TV cameras captured Manning ambling up to a dead ball before lightly toeing it away at the exact same moment that Lansbury lined up his hefty free kick – only succeeding in poleaxing Manning to the grass by smashing his shin.

What’s more, one of Lansbury’s teammates, Tom Lockyer, took the opportunity to roar in Manning’s face as he was nursing his sore shin on the ground, before getting into a few shoving matches with various Swansea players.

Now, only the most naive of football fans would suggest that Lansbury didn’t know exactly what he was doing when he decided to swing his boot – and it would take a similar football newbie to say that Manning wasn’t employing some dark arts of his own by prodding the ball away.

But with the result of the incident being a yellow card shown to both Manning AND Lansbury, it has prompted quite a debate online.

“Got in the way of a quick free-kick, so got what he deserved,” former Tottenham player Jamie O’Hara commented online, meeting opposition from large sections of fans.

Another joked: “Red card and five match ban after he’s back from doing three months in prison.”

A third was perhaps a little more sober in their reckoning: “Player who tried to kick the ball saw the other player, so it’s a red card. That’s not even a discussion.”

Accompanying the footage on Twitter after the game, Manning joked: “If anyone finds a shin floating about Luton, let me know.”

Others praised the 25-year-old international newcomer, with one telling him: “Well done for not retaliating.”

Claims of injustice aside, both players escaped serious punishment – but only one of them is going to have a sore shin in the morning.