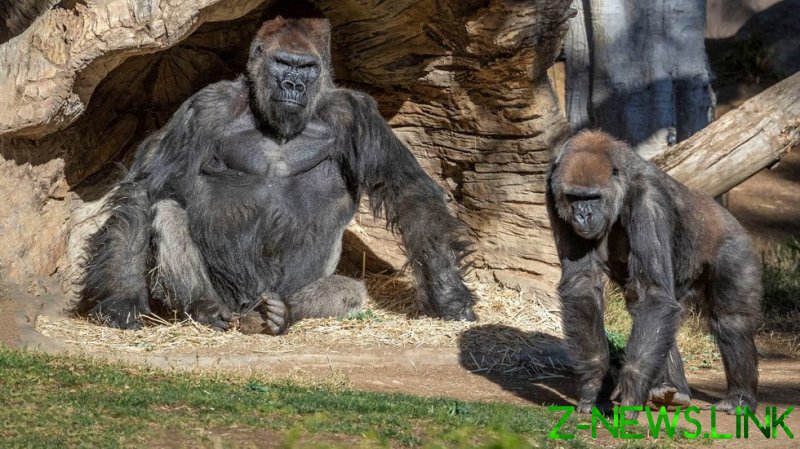 All eight members of the gorilla troop at the San Diego Zoo Safari Park are being re-tested and monitored after three of the primates turned up positive for the illness on Monday, the US Department of Agriculture’s National Veterinary Services Laboratories (NVSL) said in a statement, noting they are the “first gorillas in the United States to be confirmed positive” for the coronavirus.

“It is suspected that they acquired the infection from an asymptomatic staff member with Covid-19, despite precautions taken by the zoo,” the NVSL said, adding “The gorillas are expected to fully recover.”

The Safari Park observed in its own statement that while the test results confirmed infections in some of the animals, they do not “definitively rule out the presence of the virus in other members of the troop,” suggesting the need for further screening. The gorillas are “doing well,” but are experiencing symptoms similar to those seen in humans, such as congestion and coughing, according to the park’s executive director, Lisa Peterson.

“The troop remains quarantined together and are eating and drinking. We are hopeful for a full recovery,” she said, adding in comments to the Associated Press that the animals “have their own resiliency and can heal differently than we do” and that the focus for now is to keep them “healthy and thriving” as they recover.

California Governor Gavin Newsom also noted the news during a Monday press conference, saying“Our beloved gorillas, obviously, we are concerned about,” and that the infections would likely grab the attention of residents as the state sees a surge in daily coronavirus cases.

The NVSL assured that while “we are still learning about SARS-CoV-2” in wildlife, there is currently “no evidence that animals play a significant role in spreading the virus to people,” adding that such risk is “considered to be low.” Humans, however, can spread the coronavirus to some animals, the agency added, recommending those with the illness “avoid contact with pets and other animals.”

While the gorillas in San Francisco may be the first known cases among the species, fears of a primate infection spiked last July at the Miami-Dade Zoological Park and Gardens after one gorilla, ‘Shango,’ got into a brawl with his brother ‘Barney,’ though he ultimately tested negative for the virus. Other large animals in captivity have, however, contracted the illness previously, with at least one tiger at the Bronx Zoo testing positive last April, while six other big cats there developed dry coughs. Smaller creatures, such as pet cats, have also come up positive in a small number of cases.