Home / WORLD / Gorbachev blames communist hardliners & nationalists for Soviet collapse, most others blame him, but USSR was doomed from start

Gorbachev blames communist hardliners & nationalists for Soviet collapse, most others blame him, but USSR was doomed from start 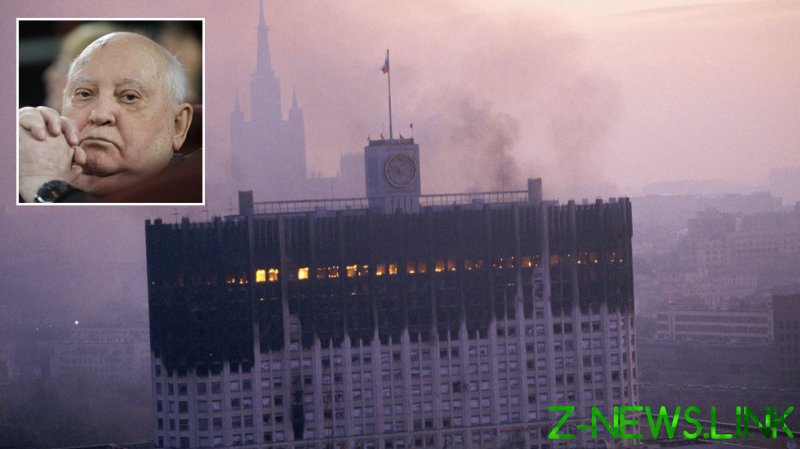 Speaking this week, the one-time leader admitted mistakes were made during his time in office, but maintained that his policy of perestroika – the restructuring of the crisis-hit superpower – was the right thing to do. Those criticizing the plan “have either forgotten or don’t want to remember what the moral and psychological situation in Soviet society was like by 1985 … The country was sinking deeper into stagnation. Economic growth had virtually stopped,” he said.

What destroyed the USSR wasn’t perestroika, says Gorbachev. Rather, it was the communist hardliners who mounted a failed coup against him in August 1991 – a move that torched the Union Treaty Gorbachev had drawn up to redefine the way the USSR was managed.

Also to blame for the collapse, says the former premier, were the leaders of the Russian, Ukrainian, and Belarusian Soviet Socialist Republics, who ganged up to split up the USSR into its constituent parts. Particularly guilty was Gorbachev’s political rival Boris Yeltsin, who went on to become the first president of post-Soviet Russia.

This is not a purely historical matter. Political forces bear the burden of past errors – if they can be tarred with the brush of destroying the Soviet Union, their present-day legitimacy suffers.

It suits most people to blame Gorbachev; if it was all his fault, everybody else is off the hook. On the other hand, were communist hardliners to blame, you can argue the problem was that Gorbachev failed to reform fast enough, and this suits liberals. But if it was Yeltsin and the liberal reformers around him who were responsible, you can argue their successors today are unfit to run the country, having dragged it into ruin once already.

So, what’s the truth?

Gorbachev is right to remind people of the situation when he took power in 1985. The Soviet model had reached the limits of its potential. Central state planning was incapable of responding effectively to the demands of a modern, high-tech economy. Social problems such as absenteeism, alcoholism and crime were on the rise. There was a growing sense that something had to be done.

The Soviet leader’s problem was that he never had a very good idea of what that something should be. At heart, he was a true communist believer, who felt that all one needed to do was liberate people and they would work constructively towards improving the existing system. His attitude was similar to that of one of his closest advisors, Alexander Yakovlev, who remarked, “It seemed to me that it was enough to remove the machinery of repression … and all would be well.”

Gorbachev was not merely naïve, he was also economically clueless. American academic Graham Allison was shocked at a meeting held to discuss economic reform by the “dumb questions” Gorbachev asked. The Soviet leader could never overcome his suspicion of private property and opted for a form of “market socialism” that kept business under state control but gave enterprises more freedom from central planning authorities. The policy undermined whatever advantages central planning provided without giving any of the benefits of the free market. It accelerated economic collapse.

When people responded to Gorbachev’s reforms in a less than constructive fashion, he blamed hardliners in the party for obstructing him. He then set about dismantling the power of the Communist Party. But the party was the primary institution regulating Soviet society. When Gorbachev undermined it, there was nothing to replace it. The result was anarchy.

Meanwhile, nationalist pressures boiled over, particularly in the Baltic region, where Estonia, Latvia and Lithuania were demanding independence. Committed to a Soviet fraternal spirit, Gorbachev never understood the nationality issue. In a speech in November 1987, he even declared the matter to have been “solved.” By 1991, he was scrabbling to keep the country together – thus the Union Treaty, which promised to devolve power in the USSR while keeping it united.

In short, the ex-leader is right that the Soviet Union was in need of reform, but wrong to say that the country’s collapse was not his fault. Reform could have taken many directions. The one he chose was catastrophic.

At the same time, Gorbachev isn’t wrong to blame others, either.

The Union Treaty would not have entirely saved the USSR. Only nine of the country’s 15 republics agreed to it. However, the country’s largest components – Russia, Ukraine, Kazakhstan and Belarus – had signed up, and the treaty had been approved by a referendum. Had it gone into effect, some sort of union might have been preserved.

What sunk the union was the August 1991 coup. The members of the Emergency Committee that tried to overthrow Gorbachev are thus partially responsible for the fact that Russia, Ukraine and other ex-Soviet states are now separate countries.

But while the hardliners made this possible, Yeltsin and his supporters were only too happy to exploit the opportunity. From early 1990 onwards, they played the ‘Russia card’ against the central leadership. Because Gorbachev controlled federal-level institutions, they set about capturing control of Russian institutions, demanded the transfer of power from the federal level to the Russian level and, in March 1991, issued a Declaration of Sovereignty of the Russian Federation.

This fatally undermined the union. It could tolerate the Baltic states separating, but it couldn’t survive Russia separating. Once the country’s liberals, to suit their political ambitions, decided to adopt the slogan “Russia for the Russians”, the USSR was doomed.

So, why did the USSR collapse? Because Gorbachev unleashed a process he couldn’t control and never understood. Because hardliners tried to stop him. And because liberals decided it suited their purposes to smash the union and have an independent Russia.

In short, almost everyone involved in politics at the time played a part. Pointing the finger at any individual group seems rather pointless.

Ultimately, though, if you really want to find someone to blame, the true culprits were the Bolsheviks who built the Soviet system. The communist model was fatally flawed from the start. With hindsight, it seems clear that, sooner or later, it was bound to come crashing down.

Perhaps a better way could have been found to deconstruct it and manage its decline. But such a thing had never been done before. Enlightened reformers, hardliners and liberals alike were faced with a unique problem that lacked a decent solution. They all messed up. But can any of us say that we could have done any better? I doubt it.