Home / Science and technology / Google will release a flexible smartphone

Google will release a flexible smartphone 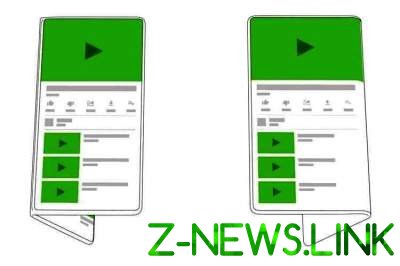 “The search giant” went to such a step did not just.

Google announced recently the Android operating system Q adapted the whole interface for foldable smartphones, which made its platform compatible with future phones like the Huawei Mate and Samsung Galaxy X Fold.

However, as it turned out, “the search giant” went on such a step not only so, but from a desire to release its own phone with a flexible screen, while having the support of the 5G networks and the folding body of new material.

Today, may 8, 2019, the code of the Android operating system Q which still exists in beta form, was discovered foldable smartphone Pixel, and found it one of the developers. Later, the head of division on development of devices Pixel Mario Queiroz said that the establishment of such a phone actually is, as now “the search giant” has a real prototype working fully. The mobile device has a flexible OLED screen, foldable case, advanced technical equipment and support 5G networks.

It must be noted that in the new OS from Google has also added native support for networks of the fifth generation, that is in the Android Q developers have relied essentially on your own the phone of the future, to enter the market may already in the current year. Published online the image was able to detect inside the latest development builds of the latest operating system, sheds light on how it will look smartphone. So, users will find two screens, one of which will be available in the unfolded condition and the other folded.

Unfortunately, it is not even known how it will be called the smartphone, but it almost certainly will be part of a line of the Pixel, which Google in recent years, making major bets. In appearance the new product will be something similar to the Samsung Galaxy Fold, but the display is a huge cut, and yet the body will be significantly thinner. Apparently, in recent years, “the search giant is” actively working on this smartphone, making this in complete secrecy, because none of the journalists did not know anything about it.