Home / WORLD / Google Podcasts is like Parler and you can find ALEX JONES there, says NYT in latest pro-censorship story

Google Podcasts is like Parler and you can find ALEX JONES there, says NYT in latest pro-censorship story 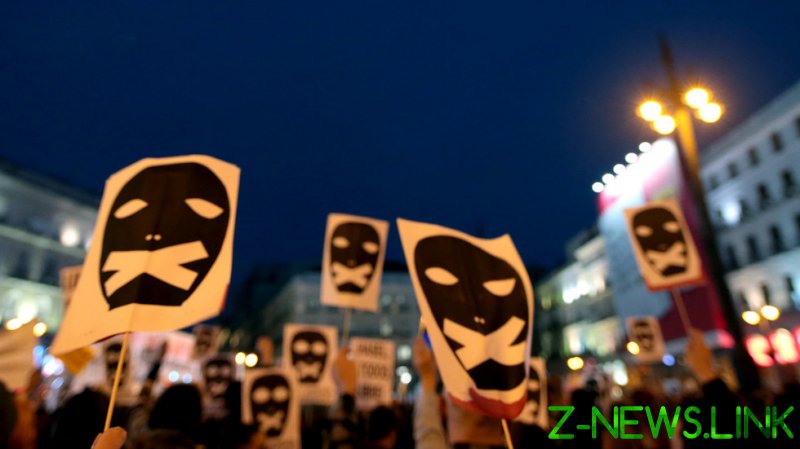 Google Podcasts is a service that helps search for, subscribe to and playback podcasts, a self-publishing media that became so popular now that leaders in the field easily rival the popularity of top TV shows and newspapers. According to the New York Times, the app “stands alone among major platforms in its tolerance of hate speech and other extremist content.”

For instance, one could find there Alex Jones, whose concerted deplatforming by Big Tech in 2018 set the stage for the increasingly restrictive policing of content today, culminating in an ouster of a sitting US president. The tech giant treats its podcast app similar to its search engine – an instrument for finding stuff people are interested in. It doesn’t host the audio records and would only occasionally remove links to them from aggregation when required by law.

The Times finds objectionable the very fact that someone like Jones can find a way into people’s ears through Google’s app, whereas companies like Twitter and Facebook “have become more vigilant in recent years in their attempts to rein in the spread of harmful content.” Some experts interviewed for the story accuse the company of putting profits before people’s safety.

“Google is perfectly well aware of how to moderate content if it cares to,” Jessica Fjeld, the assistant director of the Cyberlaw Clinic at Harvard’s Berkman Klein Center for Internet and Society, told the newspaper. She compared Google’s platform to Parler, a pro-free speech alternative to Twitter widely vilified in the mainstream media as a supposed hotbed of right-wing extremism. Parler was infamously kicked out by Silicon Valley in the wake of the January 6 Capitol Hill riot.

“It seems like made a decision to embrace an audience that wants more offensive content rather than constrain that content for the sake of safety and respect,” Fjeld argued.

The desire to protect the public from reading or hearing something bad online has recently become a major theme for the left legacy media. Another popular target for this kind of attack is Substack, an independent publishing site. It was accused of platforming “harassment” (alternatively: factual criticism) of Times reporter Taylor Lorenz, and even of being a threat to journalism in general (by allowing independent journalists to sell content without newsroom oversight).

One of the people criticizing Substack was Google’s Vice President of Privacy Product Management Rob Leathern, who said content moderation policies “can’t be afterthoughts anymore for serious businesses.” So, presumably some people in the company’s management would be receptive to more censorship at Google Podcasts, just as the Times advocates.