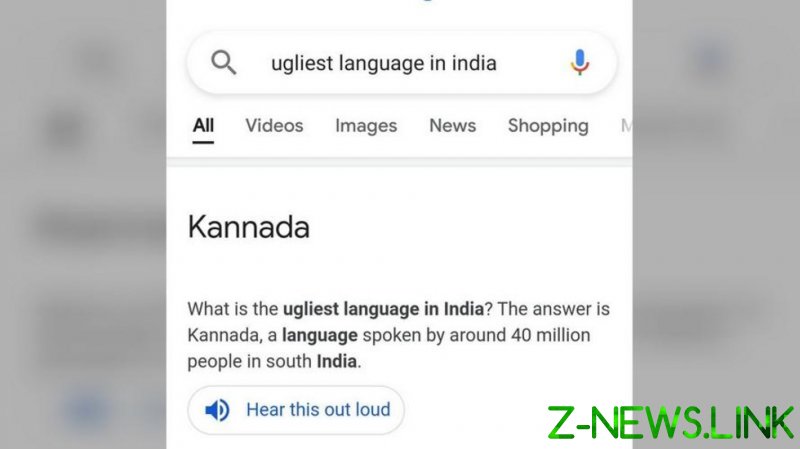 The tech giant came under fire after it was discovered that typing “ugliest language in India” into its search engine returned “Kannada,” a language spoken by more than 40 million people, predominantly in the southwestern Indian state of Karnataka.

The harsh designation soon caught the eye of officials in Bangalore, the state capital, who wasted little time in denouncing Google for slighting their official language.

“Kannada language has a history of its own, having come into existence as many as 2,500 years ago! It has been the pride of Kannadigas all through these two-and-a-half millennia,” fumed Arvind Limbavali, Karnataka’s minister for forest.

He demanded an apology from Google “ASAP” for insulting the state and its language, and also threatened legal action against the Silicon Valley giant.

P C Mohan, an MP representing Bangalore (also known as Bengaluru) Central, was similarly outraged, noting that Kannada has a “rich heritage” and is one of the world’s oldest languages.

“Kannada had great scholars who wrote epics much before Geoffrey Chaucer was born in the 14th century,” the lawmaker tweeted.

Another political figure in the state, HD Kumaraswamy, former chief minister of Karnataka, said that Google’s “blunder” was unacceptable.

“No language is bad. All languages are beautiful,” he commented.

Responding to the backlash, Google fixed the unflattering search result and issued an apology. The company acknowledged that its search feature sometimes gets jumbled and that “the way content is described on the internet can yield surprising results to specific queries.”

“Naturally, these are not reflective of the opinions of Google, and we apologise for the misunderstanding and hurting any sentiments,” the company stressed, adding that it was continually working on improving its algorithms.

Peculiar search results are nothing new to seasoned Google users. In March, Richard Grenell, the Trump administration’s former acting director of national intelligence, was incorrectly listed as president of the United States by the search engine.