Home / WORLD / Gone-ald Koeman: Barcelona sack boss less than 2 months after he claimed he had saved club… and fans want Xavi to replace him 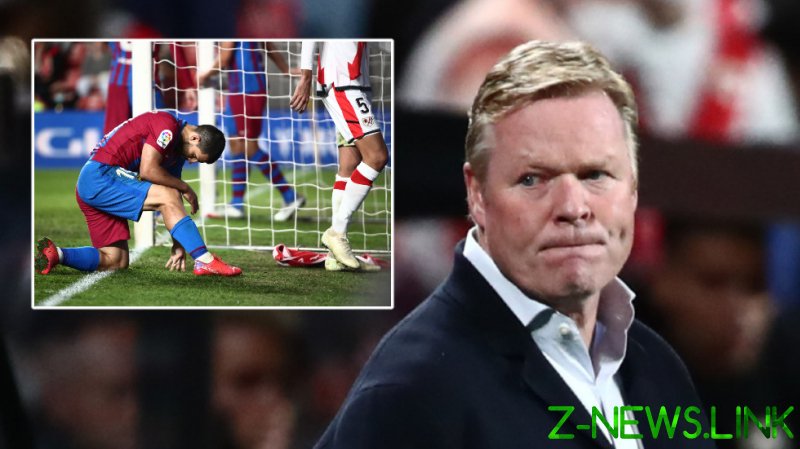 A European Cup winner as a player with the club, Koeman had given no indication that he would repeat those heights during a dire start to the campaign that has left the Spanish giants marooned in ninth in La Liga, almost equidistant between the top of the table and the relegation zone.

Koeman, who left his position as Netherlands coach to take over at the Camp Nou in August 2020, had faced a tricky task in overseeing a period of unexpectedly drastic transition courtesy of the departure of talisman and all-time club top scorer Lionel Messi to Paris Saint-Germain as a result of the club’s much-publicized financial troubles.

Despite those struggles, few would have anticipated Barca making such a wretched start this season. Their 1-0 defeat at Rayo Vallecano on Wednesday made for their first sequence of three straight away defeats since 2008, compounded by a Memphis Depay penalty miss in the aftermath of a 2-1 loss at home to arch-rivals and league leaders Real Madrid on Sunday.

The club confirmed that Koeman had been dismissed in a brief public statement.

“The president of the club, Joan Laporta, informed him of the decision after the defeat against Rayo Vallecano,” it said.

“Ronald Koeman will say goodbye to the squad on Thursday at the [training ground and academy base] Ciutat Esportiva.

“FC Barcelona would like to thank him for his service to the club and wishes him all the best in his professional career.”

In an interview that now looks distinctly ill-advised, Koeman told NOS in September that it was “not good” that Laporta had suggested “that the coach didn’t have all the power.”

“I am open to staying,” he added at the time. “Thanks to me, this club has a future.”

Some fans now want Xavi Hernandez, who made more than 700 appearances for the club between 1998 and 2015 and won the Champions League four times with them, to take over – and several Barcelona fan accounts produced mock-up announcements welcoming the 41-year-old back to the setting of so much of his success during his celebrated career.

While Koeman has embarked on a futile attempt to revive Barca’s fortunes, Xavi has impressed at Qatari club Al-Sadd, leading them to a record 34 consecutive league games unbeaten this week.

Many United followers want the Old Trafford hierarchy to sack boss Ole Gunnar Solskjaer following their almost unprecedented 5-0 home defeat to Liverpool in the Premier League on Sunday, which was the floundering club’s third loss as part of a run of four winless league games. “Serious clubs know every second counts,” said one disgruntled supporter.