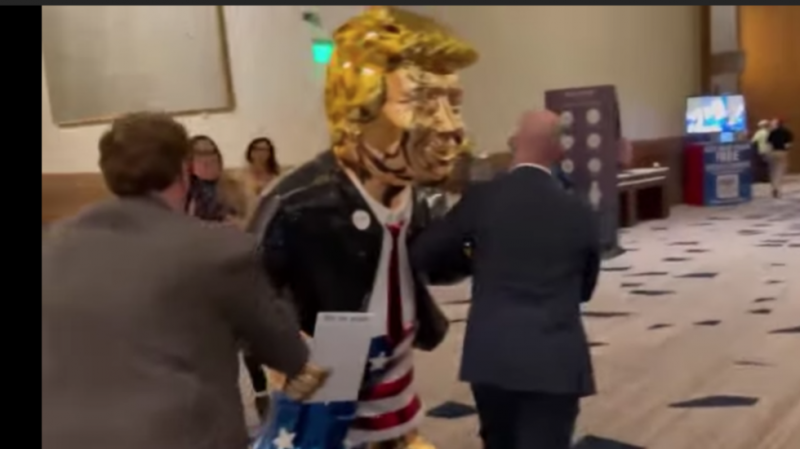 Photos of the apparent golden Trump idol being wheeled into the Florida hotel caught the eyes of thousands on social media on Friday. The statue arrived at the Hyatt Regency in Orlando ahead of CPAC, where Trump and an array of big-name conservatives are scheduled to speak over the weekend.

The statue was seen being rolled through the hallways of the hotel, stopping for selfies with Trump fans – some of whom broke out in solo chants of “four more years.” It is not clear who commissioned it.

With many Trump fans and conservatives in general describing themselves as Christians, quite a few on social media raised an eyebrow at the religious ramifications of ‘worshiping’ golden idols, recalling the Old Testament Bible story about what happened the last time the Israelites worshiped a golden calf.

The story has the prophet Moses going up a mountain to receive the Ten Commandments – which start with having only one God – and by the time Moses comes back, the people have gotten so impatient waiting that they’ve melted down all their gold to craft a shiny new calf to worship. As a result, they were cursed with plague.

Christians – including some among Trump’s base – and even the less-than-devout were taken aback by what seemed to be a blatant religious insult.

Others cracked jokes about the eventual fate of the “golden calf.”

A few pointed out that life was actually imitating art.

Trump is set to speak at CPAC on Sunday, in what will be his first public appearance since leaving office. It’s unclear whether his golden rendition will be on display for the occasion, or whether it will be destroyed and its creators forced to drink its ashes, as took place in the Bible story. Some media reports have claimed he plans to hint at a possible 2024 presidential bid.