Home / WORLD / Going out with a bang: Lionel Messi’s astounding goal can’t save Barcelona as he follows Cristiano Ronaldo out of Champions League

Going out with a bang: Lionel Messi’s astounding goal can’t save Barcelona as he follows Cristiano Ronaldo out of Champions League 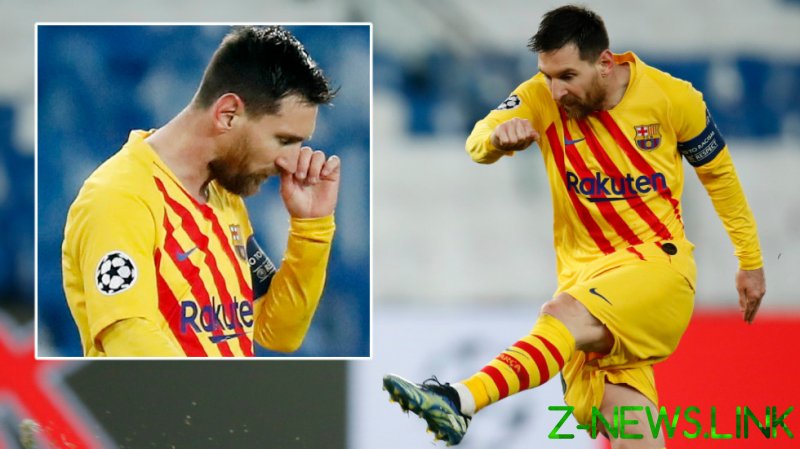 For all the pre-match talk of the epic tie between Barcelona and Paris in 2017, when Barca overcame a 4-0 deficit from the first leg to win 6-1 in the return and go through, the task ahead of them seemed almost impossible after a 4-1 mauling at the Camp Nou three weeks ago when the Spanish giants had looked almost as listless as they did in the latter stages of the tournament last season.

Barcelona made a bright start at the Parc des Princes and were unfortunate to go behind against the run of play, Kylian Mbappe confidently converting a 31st-minute penalty following a highly contentious refereeing decision over a supposed foul that no-one had spotted.

Just when the visitors looked to have no chance after going 5-1 down on aggregate, Messi took matters into his own hands. Even by his standards, the pass he received from Jordi Alba just inside the Paris half appeared an opportunity to start stringing a move together rather than go for goal himself.

Striding forward in a manner that suggested he had been stung into an emergency intervention by Mbappe’s goal, Messi hammered an unstoppable shot beyond Keylor Navas – the official Player of the Match – and into the right-hand corner of the hopelessly beaten goalkeeper’s net from way outside the penalty area.

The venom and power of the strike was spectacular to watch. Then, just before half-time, the moment arrived that could have changed the course of the overall contest.

After Barcelona were awarded a penalty of their own, Messi stepped up with the memory of his perfect penalty in the first leg fresh in the mind, making the prospect of his side moving within two goals of PSG seem little more than a formality.

Navas had other ideas, producing a fine save to his right that had the necessary conviction to deflect the strike on to the crossbar and away, ensuring the French champions maintained their three-goal cushion ahead of the second half.

Although Barcelona had the momentum on the night, the remainder of the game was altogether calmer, offering few near-misses like the one from which 20-year-old US international winger Sergino Dest had earlier hit the crossbar via a fingertip Navas save.

For a team that had gone out at the first knockout stage for the first time since 2007, the sense of positivity after the draw seemed curious and understandable: for the first match among Europe’s elite in some time, Barcelona had looked better than opponents who were Champions League heavyweights and, with the likes of Dest and 18-year-old Pedri within their ranks, shown that their new, young talents can potentially hold their own and herald a brighter future.

The fact that there had been genuine hope for Barcelona as a result of their first-half performance was creditable. There was only a modest amount of trudgery to Messi’s departure from the pitch after the final whistle had blown, sharing hugs, grins and, at worst, rueful smiles.

Whether that was down to the aggregate result failing to surprise him or a genuine sense of promise about his team-mates will no doubt be long-debated for months to come, but Barcelona coach Ronald Koeman was certainly keen to use the result as an advert to try to persuade Messi to renew his contract at the end of this season.

“Leo has seen for quite some time that the team is improving thanks to all the changes we’ve made,” said the Dutchman, who is attempting a rebuilding project and faces the painful risk of losing Messi to the likes of Manchester City during the close season.

“Particularly, we have young players of great quality. We’ve got a great future ahead. Leo can’t have any doubts about what the future holds for this team.”

A dominant draw against a Paris team who were already 4-1 up before kick-off could be viewed as a false dawn for those kind of claims, although it would have been a high-profile blow to Barcelona’s chances of keeping Messi had they capitulated, and there will be arguments that his unsuccessful penalty could have inspired a sensational comeback.

That still seems fanciful given how willing Paris were on the break, almost scoring again towards the end through Mbappe, whose finishing let him down when he had worked his way through to a clear run on goal thanks to his blistering speeed and skill.

The absence of Messi and Cristiano Ronaldo from the Champions League quarterfinals is a shame for neutral viewers and the first time they have both failed to feature in the final eight of the competition since 2005.

Mbappe and Borussia Dortmund’s Erling Haaland can now stake a real claim to be imminent successors to Messi and Ronaldo by shining during the remaining stages of the competition.

There are certain to be counter-arguments that the vastly more experienced pair are simply at the wrong clubs rather than on the wane. Barcelona, at least, will be relieved that they can make a case for Messi to believe in their potential after a second leg that was hugely improved, if not a statement of intent for future seasons.