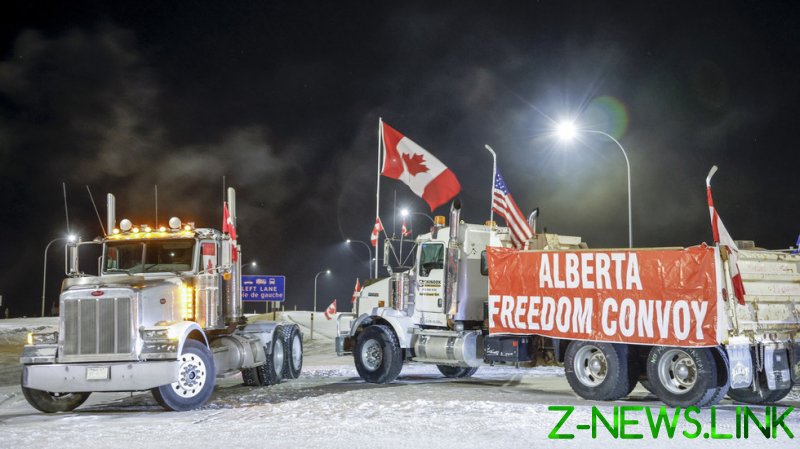 Crowdfunding site GoFundMe has shut down a campaign in support of the anti-vaccine mandate movement in Canada, after it amassed nearly $8 million, claiming that the protest is no longer peaceful.

Following a review of “relevant facts” and “multiple discussions with local law enforcement and city officials,” the fundraising was found to be in violation of the platform’s rule that “prohibits the promotion of violence and harassment,” the company said in a statement on Friday.

The platform admitted that the organizers “provided a clear distribution plan for the initial $1M that was released earlier this week and confirmed funds would be used only for participants who traveled to Ottawa to participate in a peaceful protest,” but claimed that the situation has since “evolved” and no further funds will be released.

Given how this situation has evolved, no further funds will be directly distributed to the Freedom Convoy organizers — we will work with organizers to send all remaining funds to credible and established charities verified by GoFundMe.

The fundraiser has garnered $7,964,141 (Can$10,096,400) as of Wednesday night, when it was suspended for “review.” GoFundMe said all donors may now submit a request for a full refund until February 19, 2022. The crowdfunding site said it wants to remain a “trusted platform” and insisted that it “supports peaceful protests.”

The Freedom Convoy kicked off last week in protest of a vaccination mandate for truckers traveling between the United States and Canada, seeing scores of vehicles blockade a border crossing near Coutts, Alberta and create a miles-long backup stretching into Montana.

Local officials have denounced the protest as a “significant inconvenience” which “must end immediately,” while police have declared the gathering unlawful and vowed to crack down. However, attempts to do so have met little success so far.

Canada’s capital, Ottawa has also been hit by ongoing protests, with thousands joining the convoy to denounce the mandates over the weekend, clogging the streets and reportedly even forcing Prime Minister Justin Trudeau into hiding over fears for his safety. On Wednesday, Ottawa police claimed the protests feature a “significant element” of US citizens, saying they have “converged in our city” and that “there are plans for more to come.”