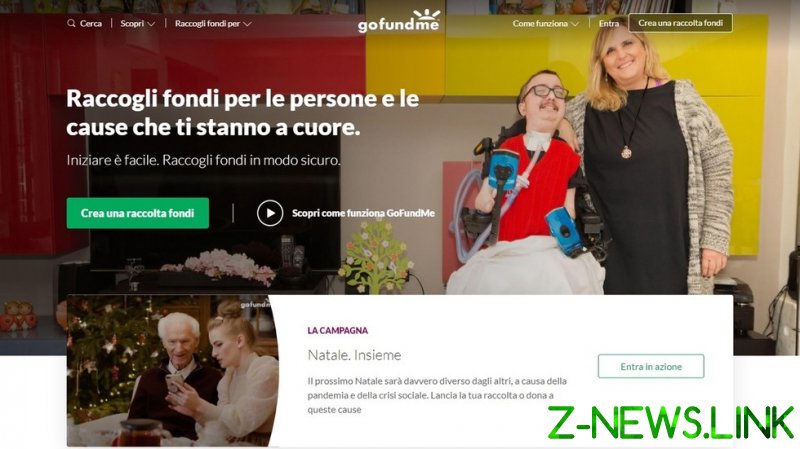 The platform was ordered to pay €1.5 million ($1.8 million) for hiding the costs of donations from Italians using it to fund various causes. The California-based company was accused of deceiving people about how much they would actually pay when donating through the platform, by hiding transaction fees and the voluntary ‘tips’ that went to the company itself.

The platform had a default setting for how big its cut from each donation would be and saw its share of donations plummet as soon as it set it to zero for new campaigns after the Italian probe was launched.

The Italian Competition Authority (AGCM) started an investigation into GoFundMe Ireland Ltd, the international operator of the crowdfunding site, in March. It responded to hundreds of complaints from Italian citizens, who accused the company of falsely advertising its services as free.

The authority confirmed that there was a basis for the complaints. GoFundMe advertised itself as allowing fundraising “at no cost” on its front page and elsewhere. In practice, donors would pay extra on top of whatever amount they would type in on a campaign page. Part of this hidden cost is a transaction fee, which amounts to 2.9 percent of the donation amount plus €0.25 ($0.30) per donation, but for some campaigns, an extra may be billed as a “tip” to GoFundMe itself.

The platform used to take a flat five percent cut of all donations, but in 2017, when the practice cost it some bad publicity, it dropped the mandatory commission and replaced it with voluntary tips. A tip percentage may go as low as zero, but the levels suggested by GoFundMe itself are 5, 10 and 15 percent.

The AGCM took issue with the fact that the level of ‘tip’, which it considers a form of commission, was set at 10 percent for most new campaigns and 15 percent in some cases. It said GoFundMe failed to properly inform fundraisers about the feature and made changing it unduly difficult.

The regulators said there was convincing evidence that if people were given a chance to make an informed decision on how much they wanted the platform to benefit from hosted campaigns, its cut would have been much smaller. After the AGCM probe was launched in March, GoFundMe changed the default setting for its Italian website to zero, and the average percentage for campaigns dropped from about 6.5 percent to less than one percent.

The popularity of GoFundMe in Italy skyrocketed this year due to Covid-19, which brought economic ruin to many people in the country. Company statistics provided to AGCM says the total amount of donations rose from between €2 million and €3 million in all of 2018 to between €6 million and €7 million in April 2020 alone. The regulator didn’t disclose the exact sums, only the ranges.

The seven-figure fine imposed by AGCM may be challenged by GoFundMe in an Italian court, it said.