Home / WORLD / ‘Godzilla vs Kong’ is a metaphor for the battle between China and the US, and guess what? Hollywood kisses both their asses

‘Godzilla vs Kong’ is a metaphor for the battle between China and the US, and guess what? Hollywood kisses both their asses 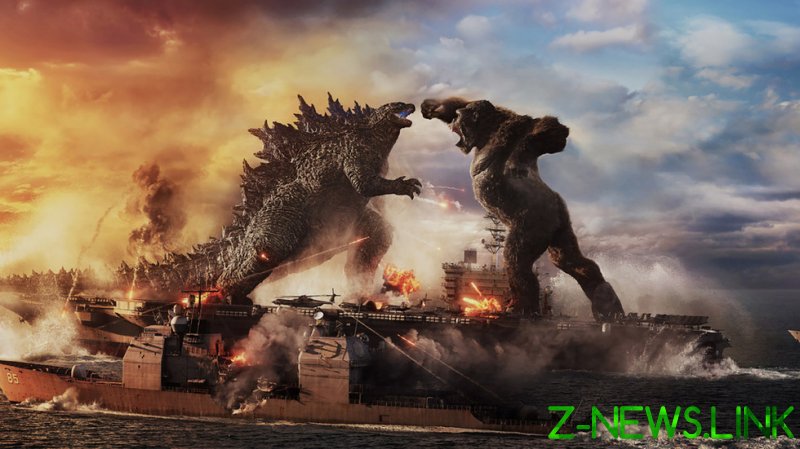 This article contains spoilers for ‘Godzilla vs Kong’.

‘Godzilla vs Kong’, directed by Adam Wingard, made a big splash at the box office when it premiered internationally last weekend, and has generated a lot of attention in the US as it opened on Wednesday in both theaters and on HBO Max.

The film, which stars Alexander Skarsgard, Millie Bobby Brown, Rebecca Hall and Brian Tyree Henry among many others, is a sequel to both ‘Godzilla: King of the Monsters’ (2019) and ‘Kong: Skull Island’ (2017), and is the fourth film in Legendary’s MonsterVerse franchise, which kicked off in 2014 with ‘Godzilla’.

I’m always interested in monster movies, because they feature rich myths that express deeper truths regarding their time and place, and are ripe with opportunities for insightful metaphor and allegory.

For instance, beginning with the first film in 1933, the King Kong story was an allegory for colonialism and slavery, as he was stolen from his tropical homeland by outsiders and brought to America in chains and exploited for profit.

Cinematically born in post-war Japan by Toho Studios in 1954, Godzilla was a metaphor for the perils of atomic weapons and American imperialism, and the embodiment of nuclear-age anxiety.

As the world has changed, so has the metaphorical meaning of the monsters. Kong has grown to represent, at least in American eyes, the US. He is a primate, warm blooded and big hearted, who is ferociously protective of those he loves, and Americans are delusional enough to see themselves and their nation in his good qualities.

Godzilla has transformed from a lizard-brained menace into a hero, and even the previous Legendary films ‘Godzilla’ and ‘King of the Monsters’ paint the cold-blooded beast as a guardian of humanity and environmental protector.

In this context, ‘Godzilla vs Kong’ strikes me as an allegory about the transition from a unipolar world, with America the lone superpower, to a multi-polar one where China and the US are equals, with Godzilla representing the former and its bid for global dominance and Kong the latter fighting to maintain its alpha standing.

The cinematic evidence supporting this thesis is that American favorite Kong is the main protagonist in the story, and that the US military fights on Kong’s side when the monsters battle.

In a nod to China’s status and power, Godzilla proves his alpha dominance by forcing Kong to submit and also obliterates the US Navy when it defends Kong.

It’s also conspicuous that the moviemakers set the climactic battle between Kong and Godzilla in Hong Kong, which is a city that can simultaneously represent different things to the film’s two largest target audiences, China and the US.

To Americans, the ‘let’s get it on in Hong Kong’ battle can be interpreted as Kong (USA) fighting for democracy against the tyranny of China. In China, it can be looked at as the city merely being collateral damage in the wider battle against the imperialism of the West.

Of course, with the film ending with both Kong and Godzilla saving face and being victorious, Hollywood is simply trying to kiss two asses at once and stay in the good graces of both China and the US and their massive audiences.

Another interpretation could be that the third monster in the movie, Mechagodzilla, is supposed to be representative of the corporate titans of the tech world that are maneuvering to rule us all, and that Kong (USA) and Godzilla (China) must work together to stop the seemingly all-powerful globalist tech behemoth. Considering that the tech industry, the US and Chinese governments, and Hollywood are like the evil three-headed monster Ghidorah, and work in unison to horde profits, power and spread propaganda, this interpretation isn’t as compelling.

A more likely scenario is that I’m just reading way too much into the popcorn delivery system that is a mindless monster movie.

The bottom line is that as a piece of cinematic art, ‘Godzilla vs Kong’ isn’t exactly ‘Citizen Kane’, but as a monster movie it’s entertaining, especially in contrast to the three MonsterVerse films leading up to it, which were decidedly disappointing.

Sure, the film gets bogged down in exposition and entirely incomprehensible plots involving conspiracy theories, hollow earth and some corporate nefariousness, but all that tomfoolery fades away once the CGI creations start stomping the earth and beating the crap out of each other.

Thankfully the movie also eschews the emotional preening so prevalent in the earlier Legendary ventures, and simply lets the monsters battle it out. And the big fights are well executed, proficiently filmed and efficiently choreographed for prime viewing of the carnage, something also lacking in the muddled visuals of previous MonsterVerse movies.

The film business couldn’t care less if ‘Godzilla vs Kong’ is good or what it means; it just cares that the movie raked in $123 million from overseas markets in its opening weekend, a Covid-era record.

This seems to indicate that the Hollywood beast is awakening from its pandemic slumber and is prepared once again to slouch across the globe asserting its malign influence. The US and Chinese governments will be thrilled to have their reliably pliable Hollywood propaganda monster back in the game.