Home / Movie / “Godzilla: the planet of monsters”: a new trailer!

“Godzilla: the planet of monsters”: a new trailer!

Maybe the morning starts with coffee. But not in the Area of Horror! We have to Wake him up – the famous cry of Godzilla. Invigorating, better than any caffeine. Especially when there’s a real reason to re-hear the wailing kaiju.

In the network appeared the new trailer for the animated film “Godzilla: planet of the beast” (Godzilla: kaijuu wakusei). About this project the legendary Studio “Toho” we wrote back in March, since then we were pleased with several impressive video, but as you know, Godzilla does not happen much. A new video of a beloved monster is even more than in the previous year.

Involved in the production company “Polygon pictures” and with a team of specialists-anime, the iconic voice actor and celebrated Directors. In General, everything is serious. Oh where, where, and in the land of the rising sun have to know how to make a quality animated movie. Especially when it comes to Godzilla.

In the last summer of the 20th century people found out that the planet they no longer belong. Giant monsters — kaiju — emerged from the bowels of the earth, and then began to destroy the human city and each other. The most fearsome of the kaiju was Godzilla. Invincible lizard with radioactive breath.
After half a century of senseless struggle people decide to give up. The fortunate few is loaded on a spaceship “Artroom” and send in 12 light-years away in a planetary system Tau Ceti, where, under a new sun, to rebuild civilization from scratch. After 20 years of travel suddenly turns out that the new world uninhabitable. Among immigrants there is a movement of “returnitem” who are eager to come back again to fight monsters for control of the planet. Their leader is a guy named Haruo. The boy was only four years old when his eyes Godzilla killed his parents. Haruo wants revenge. He convinces his comrades to use for quick return of dangerous technology of navigation in hyperspace.
Due to an error in navigation, the settlers return to Earth after 20,000 years after their own escape. From human civilization is gone, the world is ruled by monsters, and on top of the food chain sits a personal enemy of Haruo’s Godzilla.

In Japan the premiere of the film “Godzilla: planet of the beast” will take place on 17 November, and at the end of the year or early next is expected to release on Netflix. 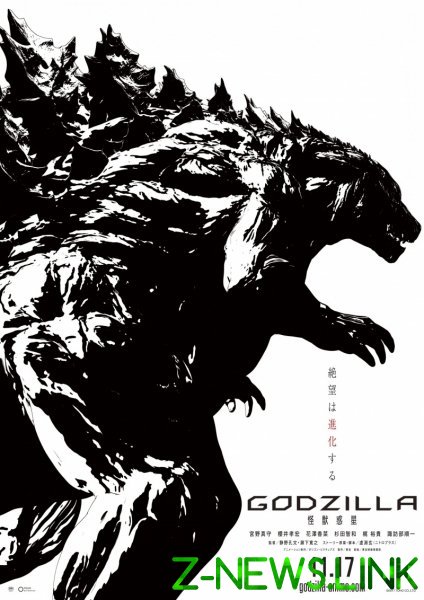