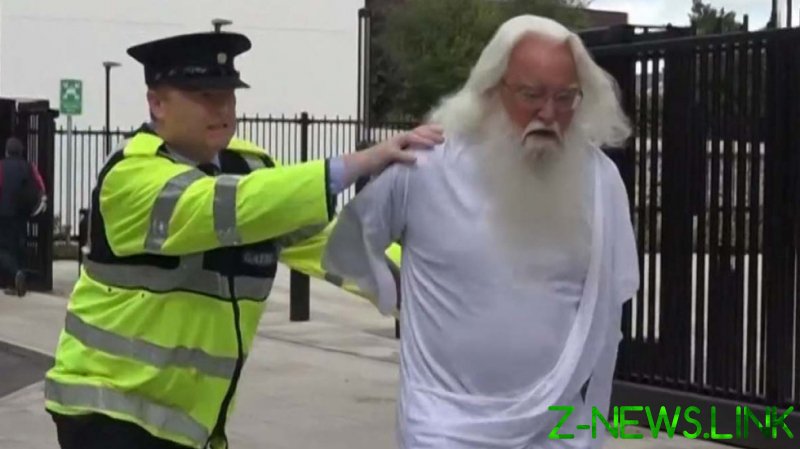 The mock news report was broadcast on RTÉ as viewers across locked-down Ireland tuned into the state television station to finally bid farewell to 2020. In the controversial clip an aged man in a white robe, with white hair and a long white beard, is seen being dragged away from a courthouse and into a police vehicle by a member of the Irish police.

“In another shocking revelation this year, God became the latest figure to be implicated in ongoing sexual harassment scandals,” a newsreader explains in a voiceover.

The Archbishop of Dublin, Dermot Farrell, also condemned RTÉ, accusing it of “mocking the divine” and of “trivialising rape victims.”

Many Twitter users were quick to side with the church leaders, accusing RTÉ of peddling “offensive rubbish,” while also calling for people to stop paying the tv licence fee that funds the national broadcaster.

“Truly appalling. The absolute state of our public broadcaster,” one person said. “All Catholics should stop paying their TV license fee,” another added.

The outrage was far from confined to the Catholic church as many in the political sphere also expressed their anger at the broadcast.

Junior Minister for Special Education and Inclusion Josepha Madigan blasted the sketch for making light of rape. “Satire is an important part of free speech, but I am very concerned about flippant jokes being made about a topic as serious as rape,” she told the Irish Daily Mail.

It truly was a New Year’s Eve to forget for RTÉ as the God sketch wasn’t the only controversy that befell the programme. Amazingly, the New Year countdown show managed to miss the countdown to 2021 as studio guests were busy chatting about their heroes of 2020. The programme then cut to a 30 second countdown after 2021 had already arrived. Needless to say, many viewers were not happy.