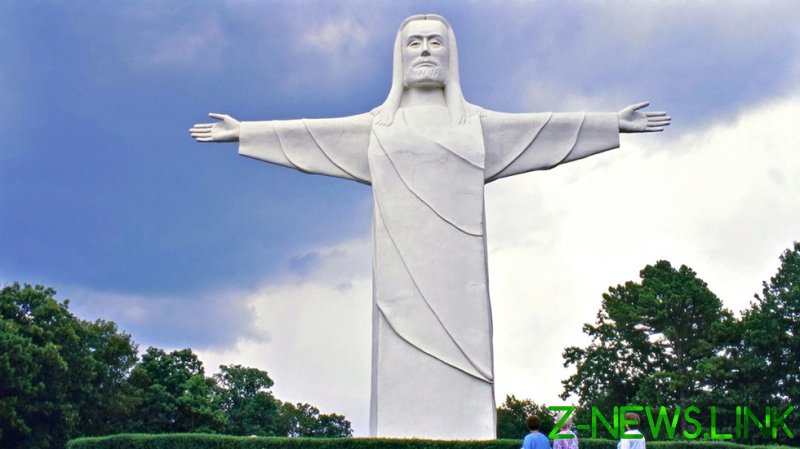 Images of the banner, placed on the Christ of the Ozarks monument located at the top of Magnetic Mountain, began circulating on Friday after it was erected overnight.

Guerilla protest art group Indecline took credit for hanging the banner and said in a press release that it was meant as a “direct response to the dramatic attempts being made in Arkansas and throughout the South, to ban abortion services to women in need.”

Protesters for Indecline snuck onto the mountain with a team disguised as a construction crew, according to local media. The group has previously made waves for similar art stunts with left-wing messaging. It erected nude statues of then-President Donald Trump in cities in the US in 2016, and vandalized an religious billboard in Mississippi earlier this year, giving it a pro-choice message instead.

Indecline is already capitalizing on its latest stunt, offering t-shirts on its website of the Christ of the Ozarks statue with a “God Bless Abortions” sign. The proceeds will go towards the Arkansas Abortion Support Network, the group said.

Arkansas is one of multiple states with new laws that have reignited debate around abortion and the 1973 Roe v Wade Supreme Court decision in the US.

A new impending law in Arkansas that would ban most abortions except in the case of saving the mother’s life is considered the most restrictive in the country by activists, though it does not enter into effect until the end of the month. The American Civil Liberties Union (ACLU) and Planned Parenthood previously filed a lawsuit in May, demanding the law be struck down.