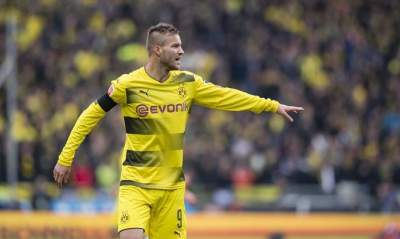 Ukrainian midfielder Andriy Yarmolenko scored in the championship match of Germany that did not save Borussia D from the second defeat of the season.

First celebrated in away match against “Hanover” Yarmolenko could at the end of the first half, but managed right from a few metres to get into an empty net.

Ukrainian reformed in the 52nd minute, the former leader of “Dynamo” took advantage of the inconsistency of the defense of the hosts and sent the ball into the unguarded corner of the goal (2:2).

See also:  Ligue 1: PSG for the first time in the season lost points

Shortly after Yarmolenko’s goal Sagada received a straight red card and left Borussia Dortmund in the minority. Hannover scored two goals and won with the score 4:2. Yarmolenko was substituted in the 74th minute.

See also:  In the hospital of California unknown opened fire on defeat

Goal against Hannover was for Andriy Yarmolenko second and fourth in the Bundesliga since moving to Borussia Dortmund. D. Informed the Ukrainian in a match of the Champions League opened the scoring, Tottenham, scored in the Bundesliga, “Augsburg”, and in the recent Cup match against Germany “Magdeburg” penalty.