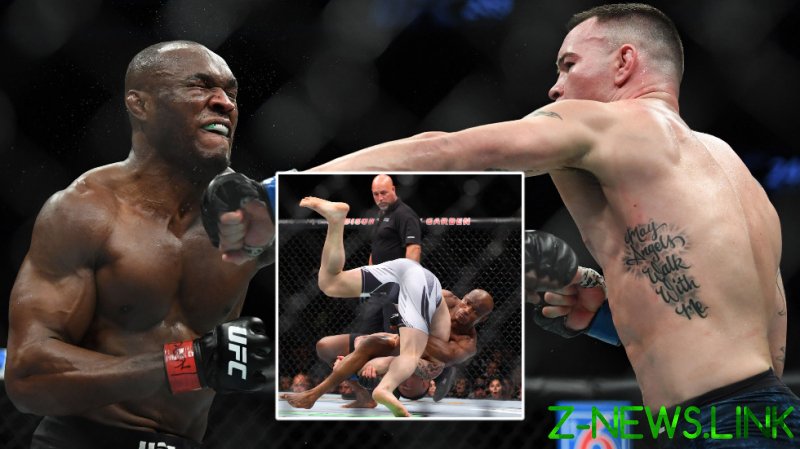 The feared duo exchanged antagonistic jibes in the build-up to their rematch at UFC 268, making their embrace at the end of the scrap something of a surprise in New York.

Burly referee Dan Miragliotta produced a snappy soundbite as he stepped in, telling Covington and Usman to “go kiss later”.

Champion Usman looked the more confident of the two in a tight first round, scoring a takedown and looking resolutely unflustered against the relatively freewheeling Covington.

The key passage of the second came in the closing seconds of the round, when Usman landed two left hooks to floor his bitter rival and leave him hanging on before returning to his stool looking drained.

To his credit, Covington seemed to recover from a daunting position at the start of the third, ending the round with a takedown that Usman almost immediately rose from.

The round ended with Usman returning Covington’s glare by grinning at him, clearly keen to show that ‘Chaos’ had not unduly ruffled his evident composure until that point.

Covington targeted a fire fight with Usman in the fourth, achieving some success with body shots and troubling ‘The Nigerian Nightmare’ at the end of the round.

Usman was ever-ready to reply with judiciously taken shots of his own, using his jab wisely and looking noticeably less fatigued than Covington, whose face by now was largely covered in blood.

The challenger threw everything at his revenge bid in the final round, looking dangerous until the end despite the action briefly stopping with 40 seconds remaining after he took a finger to an eye.

“There was a lot of trash talk, a lot of bad blood here,” accepted Usman. “I’m sure there’s still going to be some after tonight, but this guy is a tough son of a b*tch – he’s tough as sh*t.

“When you share an octagon with someone who’s stuff, you can’t help it. That respect is going to come.

“His technique is down, the power came up a little bit. I could tell they’d been working on it, so I had to give him respect.

“I am the pound-for-pound best alive right now. He’s tough. The best take our time, stay calculated and find our finish. He’s a tough son of a gun and wasn’t going to let me find that finish.”