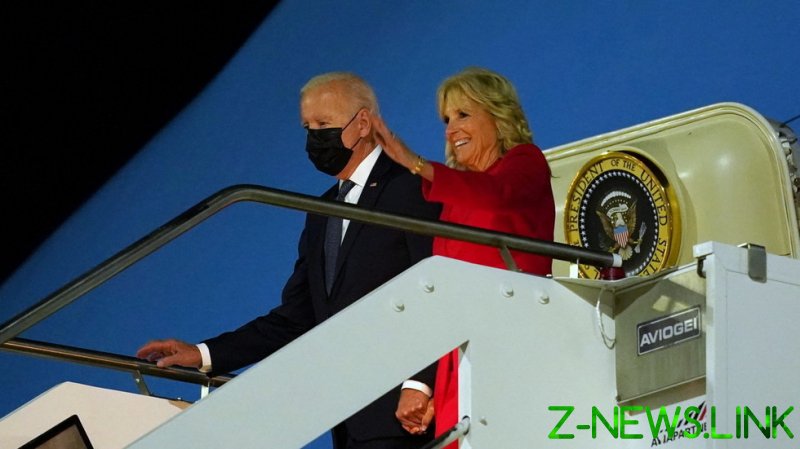 More than 400 private jets carrying politicians and business executives to this week’s conference will belch out 13,000 tons of carbon dioxide, exceeding the emissions of 1,600 average Scots for a full year, according to an estimate by the UK’s Sunday Mail.

“Private jets are very prestigious, but it is difficult to avoid the hypocrisy of using one while claiming to be fighting climate change,” environmental activist Matt Finch told the newspaper.

Heads of states and other leaders from across the globe will be among the private jet-setters – from Japan to India to Israel to even the UK itself. US President Joe Biden is reportedly scheduled to arrive on Air Force One on Monday.

That trip will follow the American president’s flight from Washington to Rome for this weekend’s G20 summit, where leaders pledged “meaningful and effective” climate action but offered few specifics on how they will keep temperatures from rising more than 1.5 degrees Celsius.

It’s not clear whether Biden will again deploy a massive motorcade, such as the 85-car parade of gas-guzzling vehicles that chaperoned his visit to the Vatican on Friday to meet with Pope Francis. Biden is expected to tout more than $500 billion in proposed US spending on environmental programs when he gets to Glasgow.

Critics blasted the COP26 participants for professing to fight climate change while doing nothing to pare their enormous carbon footprints. “Every world leader or dignitary that arrives to COP26 by private jet is an eco-hypocrite,” former member of the European parliament Nigel Farage said on Sunday in a Twitter post.

Britain’s Prince Charles and Prime Minister Boris Johnson were among those targeted for criticism, inasmuch as they took private jets to Rome and Scotland. Johnson also drew political pushback in June, when he traveled to Cornwall by private jet for the G7 summit rather than taking a train from London.

According to Finch’s Transport and Environment NGO group, CO2 output from private jets is soaring, which helps account for the fact that 1% of the population generates half of global aviation emissions. Flying by private jet emits about 40 times as much CO2 per passenger as commercial air travel, according to a study by Lund University.

Biden’s climate envoy, John Kerry, has been another alleged environmental hypocrite for globe-trotting by private jet while warning that “we cannot afford further delay” in solving the climate crisis. His family’s Gulfstream GIV-SP reportedly emitted an estimated 116 metric tons of CO2 in the 11 months leading up to Biden’s inauguration in January – equivalent to the annual emissions of 25 passenger cars.

Kerry’s explanation for traveling by private jet might resonate with many of the COP26 dignitaries. After traveling to Iceland by private plane to receive an environmental award in 2019, he said in an interview that there was really no other option for someone like him.

“The time it takes me to get somewhere, I can’t sail across the ocean,” Kerry said, without mentioning such options as commercial airlines. “I have to fly, meet with people and get things done.” He added, “If you offset your carbon, it’s the only choice for somebody like me who is traveling the world to win this battle.”