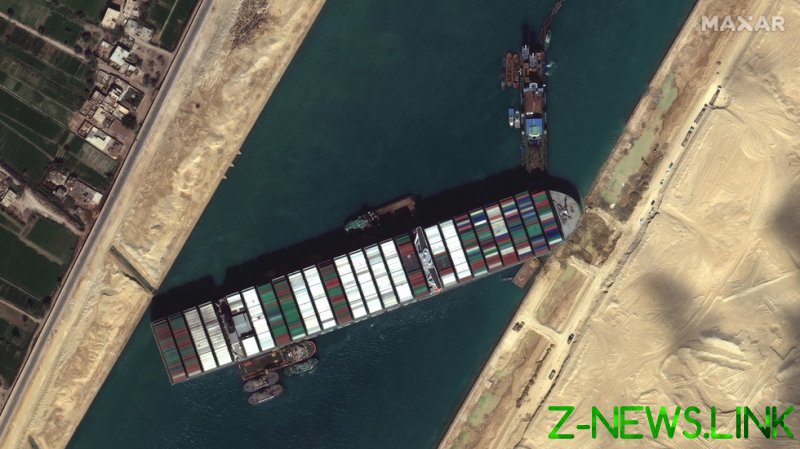 Two container ships operated by French shipping and logistics giant CMA CGM Group changed course and were heading towards the Cape of Good Hope, the company revealed on Saturday. At the same time, the group is considering alternative maritime, rail, and air routes for cargo yet to be loaded, while at least 10 of its ships were still waiting to pass through the narrow but vital waterway.

At least 10 vessels, including oil tankers and liquefied natural gas (LNG) carriers, also changed course not to get stuck in the logjam in the Suez Canal, CNBC reported. According to MarineTraffic spokesman Georgios Hatzimanolis, Cheniere and Shell tankers were heading towards the Cape of Good Hope like some of the ships operated by CMA CGM Group.

“From Asia to Europe we are seeing ships divert in the Indian Ocean, just below the southern tip of Sri Lanka,” he told CNBC, adding that the number of diverted ships could rise if the situation drags on.

The Suez Canal – an important global shipping route accounting for about 15% of world shipping traffic – has been blocked since Tuesday, when one of the world’s largest container ships, the Ever Given, got stuck there. The blockage of the waterway has put more pressure on already strained supply chains, and could cost global trade up to $10 billion a week, according to German insurer Allianz.

However, not all companies are rushing to reroute their vessels. Over 300 ships carrying various cargoes are still waiting to pass the 193km (120 mile) canal, as an alternate route may add up to two weeks to their journeys and send shipping costs soaring.

Tugboats and dredgers have been working to free the 400-meter-long ship, and it finally moved on Saturday evening. While strong tides and winds are complicating the work to dislodge the giant vessel, Suez Canal Authority (SCA) Chairman Osama Rabie said on Saturday that he expects the ship could slide and move from the spot it’s in at any moment.