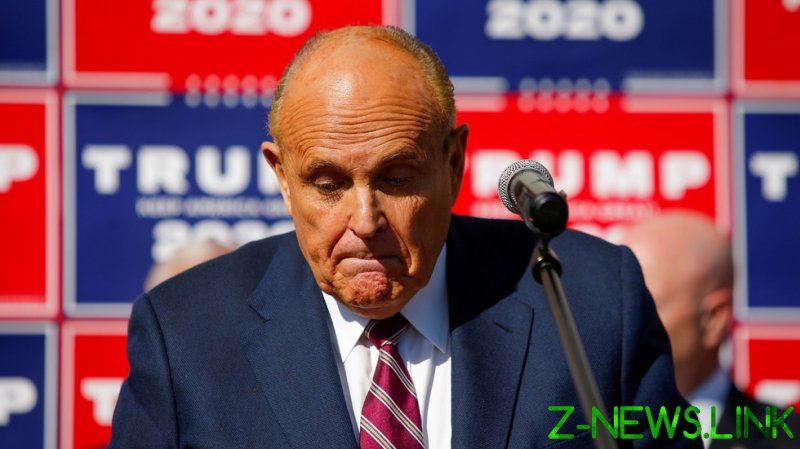 The suspension order accuses Giuliani of making false claims to “courts, lawmakers and the public at large” while he worked as a lawyer for Trump.

Giuliani was one of the central figures in Trump’s attempts to overturn the results of the 2020 election, with both the former president and his lawyers claiming voter fraud in key swing states, though no official evidence of widespread fraud has been found.

One example given for Giuliani’s suspension is a claim that “dead people ‘voted’ in Pennsylvania,” one of multiple states where the lawyer and former city mayor argued false ballots were pushed through in favor of Joe Biden.

“As the anecdotal poster child to prove this point, he repeatedly stated that famous heavyweight boxer Joe Frazier continued to vote years after he was dead and stated on November 7, 2020 ‘he is still voting here,’” the order said of Giuliani’s claim, adding that his Frazier comment was “unequivocally false.”

“We conclude that [the] respondent’s conduct immediately threatens the public interest and warrants interim suspension from the practice of law, pending further proceedings before the Attorney Grievance Committee,” the new order states.

Giuliani’s critics, including anti-Trump lawmakers, have celebrated the former mayor’s suspension since it was announced on Thursday.

Others have pointed toward Giuliani’s suspension being connected with his falling out of favor due to his partnership with Trump, including lawyer and legal analyst Jonathan Turley who argued the license suspension could set a precedent with “inherent dangers.”

In a statement responding to his former lawyer’s suspension, Trump described Giuliani as a “great American patriot” and once again called the 2020 presidential election “fraudulent.”

“They should be ashamed of themselves,” Trump said of the “radical Left” behind the suspension.

Lawyers for Giuliani called the suspension “disappointing” and “unprecedented.”

“We believe that once the issues are fully explored at a hearing Mr. Giuliani will be reinstated as a valued member of the legal profession that he has served so well in his many capacities for so many years,” they said.

The suspension only adds to Giuliani’s troubles, as he is also being investigated by Manhattan prosecutors for allegedly acting as a foreign agent while representing Trump. He is also facing a defamation lawsuit from Dominion Voting Systems over claims he made about the authenticity of the 2020 presidential election results.