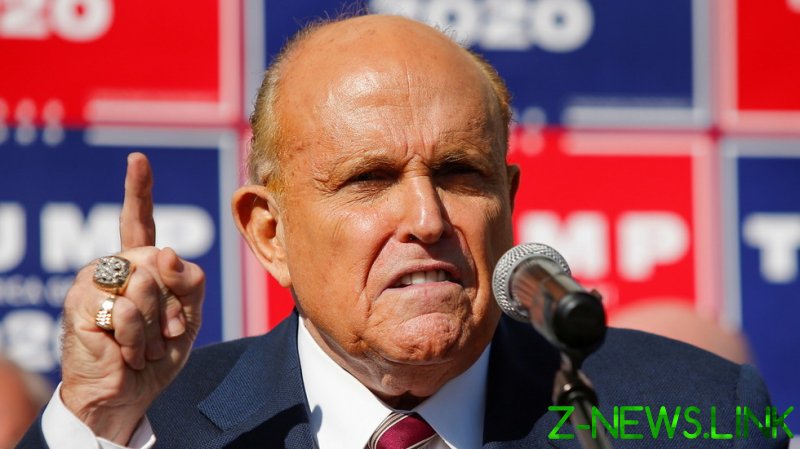 “@realDonaldTrump election night 800,000 lead was wiped out by hundreds of thousands of mail in ballots counted without any Republican observer,” Giuliani tweeted on Sunday morning, a day after Associated Press called Pennsylvania and the entire election in favor of Joe Biden.

“Why were Republicans excluded?,” he continued, before asking his followers to “tweet me your guess, while I go prove it in court.”

Like his boss, Giuliani has insisted that Biden’s apparent victory was the result of fraud. Republican observers say they were denied access to counting centers, which allowed staff inside to do “bad things” with the ballots, in Trump’s words. At least one postal worker has claimed that he was ordered to backdate mail-in ballots, while the Trump campaign has alleged that droves of dead people voted in Philadelphia, and that staff there illegally counted late-arriving mail ballots.

Giuliani called the “Philadelphia Democrat machine” “brazen,” and claimed that the late heavyweight boxer Joe Frazier and actor Will Smith’s grandfather both voted in previous elections in the city after their deaths.

“I bet Biden dominated this group,” he tweeted. “We will find out.”

Biden beat Trump in Pennsylvania by around 40,000 votes, or 0.6 percent of the total vote, though a small number of ballots remain to be counted. Though Republicans in the Keystone State have not outright called Biden’s win fraudulent, State House Speaker Bryan Cutler called on Friday for Governor Tom Wolf to launch a “full audit” of the vote there before certifying the result.

In a letter to Wolf, Cutler cited the widespread use of mail-in ballots without signatures, the exclusion of Republicans from polling places, and the extension of the mail-in deadline as “issues that cannot be overlooked.”

Based on how the vote was run in Pennsylvania, “no matter who wins, you’re going to have 50 percent of the population, no matter which side, that is not going to have faith in the result,” State Senate Majority Leader Jake Corman told reporters on Friday.

Quizzed by reporters about her handling of the vote, Pennsylvania’s Secretary of State, Kathy Boockvar said that she had done everything “to make sure every voter, every candidate and every party has access to a fair, free, safe and secure election.”