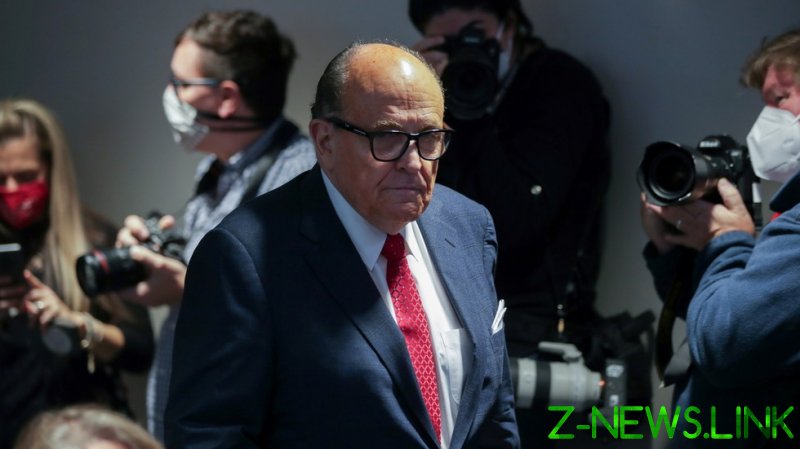 Appearing on Fox News’ ‘Tucker Carlson Tonight,’ Giuliani directly addressed the bombshell story that his New York City apartment was raided by federal authorities this week. While the warrant for the search has not been made public, the investigation reportedly centers on the former mayor’s dealings in Ukraine.

While complementing the agents involved in the raid as “very, very professional,” Giuliani said they appeared “perturbed” when he asked them to take three hard drives allegedly belonging to Hunter Biden.

Giuliani claimed he asked them “one last time” to take them and they refused again. All electronics within Giuliani’s home were covered by the subpoena, meaning they were “required” to take the harddrives, according to Giuliani.

While the FBI agents did not take the devices, Giuliani ‒ who was behind the infamous New York Post report on the damaging contents of a laptop allegedly belonging to Hunter Biden last year ‒ said they were quick to believe that the hard drives belonged to the younger Biden.

Giuliani further claimed that the search warrant on his apartment was illegal and went on to allege that federal authorities illegally obtained his communications on the iCloud.

“The only way you can get a search warrant is if you can show that there is some evidence that the person is going to destroy the evidence,” he said. “Well, I’ve had it for two years, and I haven’t destroyed it, and they also got it from the iCloud! So there is no justification for that warrant.”

He later tweeted that the Department of Justice had informed his lawyer that investigators “secretly” went into his iCloud in 2019 and accessed communications that were protected by attorney-client privilege.

Many critics have pointed to Giualiani’s iCloud complaints and noted that the timing would mean the information was obtained not while Joe Biden was in office, but while his client Trump was.

Giualiani said the warrant for information on his iCloud would have been obtained while he was defending Trump during his “impeachment defense.”

“They took documents that are privileged. And then they unilaterally decided what they could read and not read. So the prosecutors at the Justice Department spied on me,” he said.

Giuliani attorney Robert Costello had made the same claims as his client, telling The Daily Beast that a conference call with officials at the Department of Justice confirmed that a “covert warrant” had been used to access the former mayor’s information.

“They told me they obtained a ‘covert warrant’ for Giuliani’s iCloud account in ‘late 2019.’ They have reviewed this information for a year and a half without telling us,” he said.