Home / WORLD / Girls will return to secondary schools in Afghanistan, but only after ‘safe environment’ is set up, Taliban tells media

Girls will return to secondary schools in Afghanistan, but only after ‘safe environment’ is set up, Taliban tells media 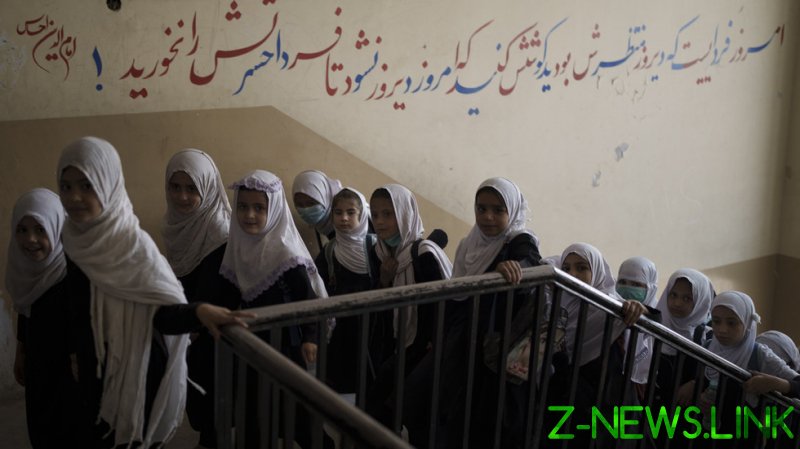 “We are not against education of girls, but we are still working on mechanisms of how their school attendance can be possible,” Taliban spokesperson Zabiullah Mujahid told Germany’s Der Spiegel magazine.

Mujahid said that a safe environment and transportation must be guaranteed for female students before they are allowed back in classrooms. He said legal scholars must prepare a report on how to set up a secure environment for girls and women in education and employment.

Women and girls were banned from education and holding jobs and were forced to cover themselves from head to toe in public when militants first came to power in Afghanistan between 1996 and 2001.

Shortly after capturing Kabul last month, the Taliban promised that women would enjoy more freedoms than during the group’s previous rule. However, only boys were allowed to resume their studies when secondary schools reopened on Saturday.

The militants dismantled the country’s Ministry of Women’s Affairs this week, replacing it with a Ministry of Promotion of Virtue and Prevention of Vice. The same name was used in the 1990s by the authority tasked with punishing women who disobeyed harsh restrictions imposed on them.

Women have held several protests in Kabul, demanding that the Taliban guarantee them the same rights as men. The rallies were dispersed by the militants.

The Taliban was knocked from power in 2001 when the US led the invasion of Afghanistan as part of Washington’s global ‘War on Terror’, launched in response to the 9/11 terrorist attacks. The war became the longest in America’s history, resulting in nearly two decades of violence and occupation that failed to bring peace and stability to the country.

The militants reconquered nearly the whole of Afghanistan in a sweeping offensive that ran concurrent to the final stage of the withdrawal of Western forces. The last American troops left the country at the end of August.