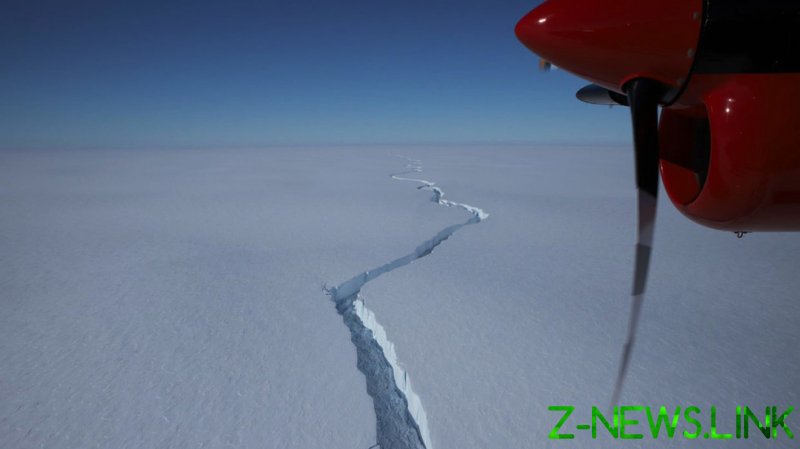 Such ‘calving’ events are part of the normal life cycle of polar ice shelves and there is currently no evidence that climate change played a role, according to researchers from the British Antarctic Survey (BAS).

Dramatic footage shot by a BAS surveillance aircraft shows the extent of the vast chasm that opened up and eventually broke through the shelf on Friday.

The BAS Halley Research Station, which is located on the vast ice shelf, is unlikely to be affected by the calving as they moved its location several years ago in anticipation of impending, large-scale calving events.

A 12-person team working at the station left in mid-February as the facility is now closed for the Antarctic winter, during which time it’s pitch black, and the temperature often falls below minus 50 degrees Celsius (or -58 Fahrenheit).

“We monitor the ice shelf daily using an automated network of high-precision GPS instruments that surround the station, these measure how the ice shelf is deforming and moving,” Professor Dame Jane Francis, the director of British Antarctic Survey, said in a press release, adding that researchers avail of advanced satellite data and imagery from the ESA, NASA and the German satellite TerraSAR-X to monitor activity across the ice shelf.

As for what’s to come, Francis says the picture is unclear and that the giant iceberg could go either way.

“Over [the] coming weeks or months, the iceberg may move away; or it could run aground and remain close to Brunt Ice Shelf.”