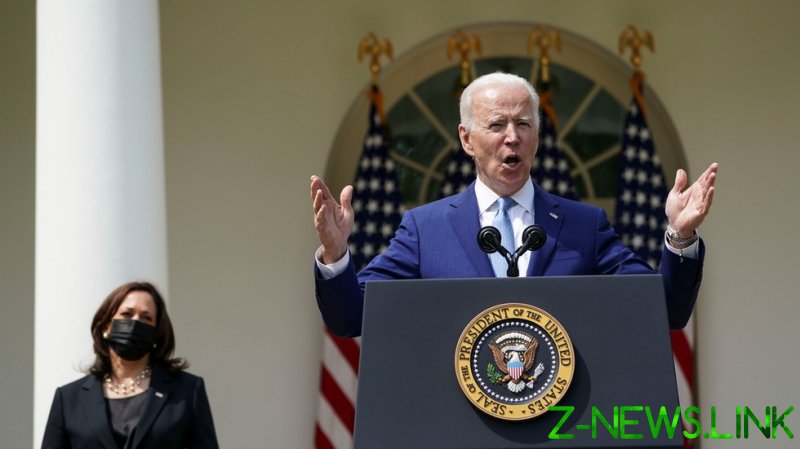 “Gun violence in this country is an epidemic, and an international embarrassment,” Biden declared on Thursday, in a speech announcing six executive orders aimed at tightening up the US’ gun laws. The orders were revealed by the White House a day earlier, and include a directive asking the Justice Department to crack down on untraceable ‘Ghost Guns’ and issue model “red flag” legislation, and a proposed restriction on shoulder braces for pistols.

Biden’s actions come in the aftermath of two prolific mass shootings in the US, in Boulder, Colorado, and Atlanta, Georgia last month. However, Biden’s orders do nothing to achieve his campaign promises to ban so-called “assault weapons” and high-capacity magazines, to hold gun manufacturers legally accountable for shooting deaths, and to close the ‘Charleston Loophole,’ which allows customers to buy firearms if their FBI background check is not completed within three days.

Such actions are the purview of Congress, and with Democrats holding the thinnest majority in the Senate, are unlikely to pass. Appealing to Republicans, Biden insisted that gun control “is not a partisan issue among the American people,” and urged the GOP to help pass two separate bills already passed by the House of Representatives. One bill would extend background checks, another would extend these checks to private sales.

Despite Biden’s appeal to bipartisanship, gun control is a bitterly divisive issue in the US. Even something as apparently popular as “red flag” legislation is mired in controversy. Former President Donald Trump supported, then opposed such legislation, which would allow courts to keep guns out of the hands of those judged a risk to themselves or others.

With Biden’s model red flag laws based on tips from these people’s family and friends, Conservative commentators have warned that these laws may be used by Democrats to disarm their political opponents.

Furthermore, they argue that “red flag” laws violate the Constitutional right to due process, and allow the courts to disarm people who haven’t been convicted of any crime.

Biden reassured conservatives that nothing he proposed “impinges in any way on the 2nd Amendment,” but in the same breath insisted that “No amendment to the Constitution is absolute,” a statement that plenty of Republicans and legal scholars would disagree with.

Biden is not the first Democrat to find his push for gun control stymied by Congress. Barack Obama had a wider majority in the Senate when he attempted and failed to pass the sweeping Assault Weapons Ban in 2013. Like Biden, Obama relied instead on executive orders to restrict firearms rights, none of which drastically affected gun owners.

Nevertheless, Biden insisted on Thursday that his executive orders are “just the start” of a wider campaign to crack down on “senseless gun violence.”