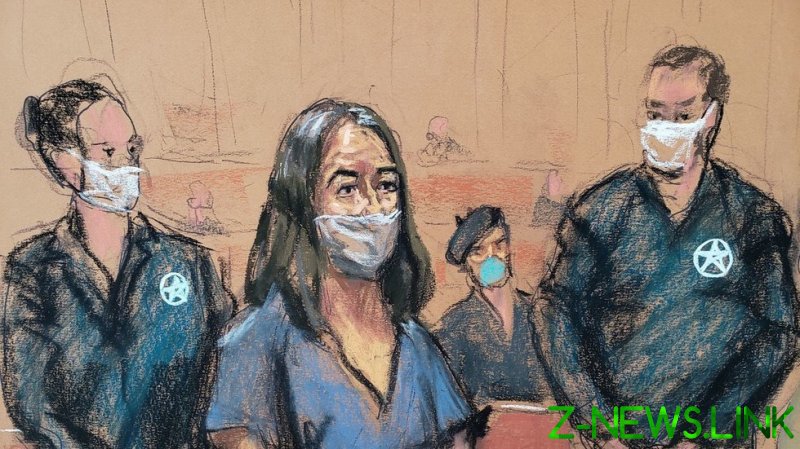 Maxwell is seen in the undated video looking noticeably pale with discoloration under one of her eyes, her normally meticulous hair and makeup absent. Surfacing on Thursday after one of her lawyers released it on social media, the photo quickly made the rounds online, as it is the first that is believed to show a real, non-photoshopped image of the wealthy sex trafficking suspect since she was brought into custody.

Arrested last July, Maxwell is due to begin trial hearings on July 12th, over a year after she was indicted on eight counts of child sex trafficking, conspiracy to transport minors across state lines for sexual purposes, and other crimes related to her relationship with Epstein. Two more counts were added to the indictment earlier this month, also relating to sexual exploitation of young girls, including a then-14-year-old who claims she was paid hundreds of dollars by the pair, both for sexual encounters and to help Maxwell find more girls. If true, that claim suggests Maxwell and Epstein were conducting sexual blackmail operations for a whopping two decades, somehow evading authorities.

While Maxwell has pleaded not guilty to the new charges as well, her lawyers have demanded the trial be put off until January so they can work out that aspect of her legal defense. If convicted, Maxwell will face up to 80 years in prison, effectively a life sentence for the 59-year-old.

Citing what she insists are miserable conditions in the Brooklyn Detention Center where she is being held, Maxwell has offered up $28.5 million in bail for the third time, only to have it rejected once more. Her lawyers have demanded bond, insisting she had plenty of money and property to offer as collateral, even though the number of passports she owns – and her myriad contacts in other countries – pose a major flight risk. The lawyers also argue that she is taking the brunt of public and prosecutorial anger against Epstein because he is “unreachable” – deceased – and she is the next best target.

Maxwell’s lawyers have misled the public before, however – despite the attorneys lamenting the dire state of Maxwell’s physicality, prosecutorial authorities found no traces of the supposed “hair loss” she was enduring months ago amid more ill-treatment at the jail. Guards, however, have alleged the reported “hell hole” conditions Maxwell has complained of, including a powerful rotten odor in her cell, were of her own making, saying she had declined to flush the toilet during her stay.

Convicted sex predator Epstein died last August, allegedly by suicide, despite two guards being assigned to check on him to make sure he did not kill himself after a previous suicide attempt. Epstein was in jail himself awaiting a hefty sentence for sex trafficking of minors and similar crimes to Maxwell’s.