Home / WORLD / ‘Get right before you get left, boomer’: Marines backtrack after jumping into Fox host Tucker Carlson’s row with Pentagon

‘Get right before you get left, boomer’: Marines backtrack after jumping into Fox host Tucker Carlson’s row with Pentagon 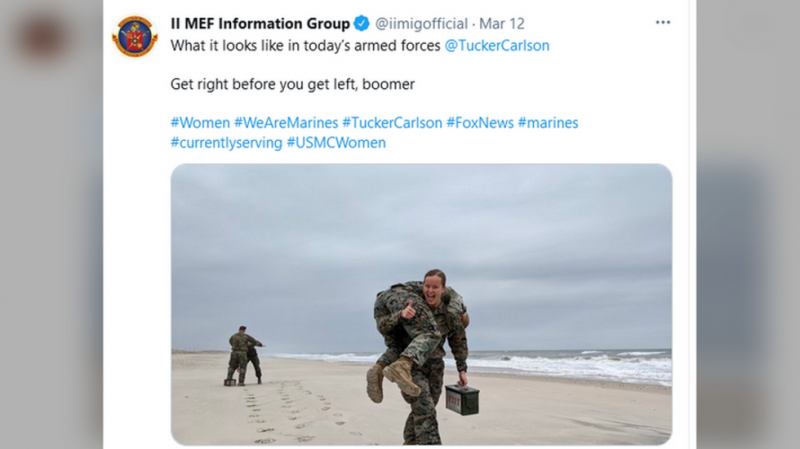 “What it looks like in today’s armed forces [Tucker Carlson], Get right before you get left, boomer,” the Marines tweeted on Friday, accompanying the tweet with an image of a smiling female officer carrying a fellow officer.

“Please focus on China and not Tucker Carlson,” a commentator responded, prompting the force to fire back with: “Come back when you’ve served and been pregnant.”

The peculiar exchange has drawn backlash, with commentators suggesting that the Marines had their priorities misplaced.

Some have accused the force of attacking civilians on social media, and questioned the use of taxpayer money.

After the account got rationed for its posts, it issued an apology of sorts on Saturday.

“We are human, and that tweet was intended to support our female warfighters,” the Twitter account for the second Marine Expeditionary Force tweeted. “We can do better, and we will collectively take a knee, review our procedures and get back in the fight. Our focus is to train, fight and win.”

The mea culpa did not appease the critics, however. Former Trump administration official Andrew Kloster asked the Marines what would be done to ensure that the Twitter-ranting episode never happens again.

“What protocol changes will be announced to ensure that this kind of waste of taxpayer funds doesn’t occur again in the future? Perhaps the [Department of Defense Office of Inspector General] can recommend some action items,” he tweeted.

The Marines appeared to concede that they “strayed away” from the brand, promising Kloster “to correct our mistake going forward.”

While the Marines took a swipe at Carlson for purportedly attacking women, Army veteran and journalist Virginia Kruta pointed out the Fox News host never said pregnant women shouldn’t or couldn’t serve honorably in the military. His central point was “mission first,” she said. While it’s less damaging when other types of jobs are filled based on criteria other than merit, Carlson argued, the military must always be about maximum readiness to “fight and win wars.”

Carlson was triggered by President Joe Biden’s comments on Monday about efforts to “really change the culture and habits of the US military” – in particular, a reference to “creating maternity flight suits.” The Fox host said that rather than focusing on addressing the major security threats against the US, especially China, Biden and Defense Secretary Lloyd Austin are playing identity politics.

The Pentagon’s response was intense, including statements to the mainstream media and posts on social media assailing Carlson. A Department of Defense press release was headlined, “Press Secretary Smites Fox Host . . . .”  That press secretary, John Kirby, said at a press briefing that the US military is the greatest military the world has ever seen “because of its diversity.”

The mainstream media obligingly framed Carlson’s critique as an “attack on pregnant women serving in the military.” Others piled on, emphasizing Carlson’s background as a rich kid who never served in the military.

Master Gunnery Sergeant Scott Stalker, the senior enlisted leader in the US Space Command, posted a Twitter video saying Carlson “has never served a day in his life” and that “we value women in our armed forces.”

Carlson argued that disqualifying his arguments based on his lack of military service is like saying someone can’t criticize police brutality if they haven’t worked in law enforcement.