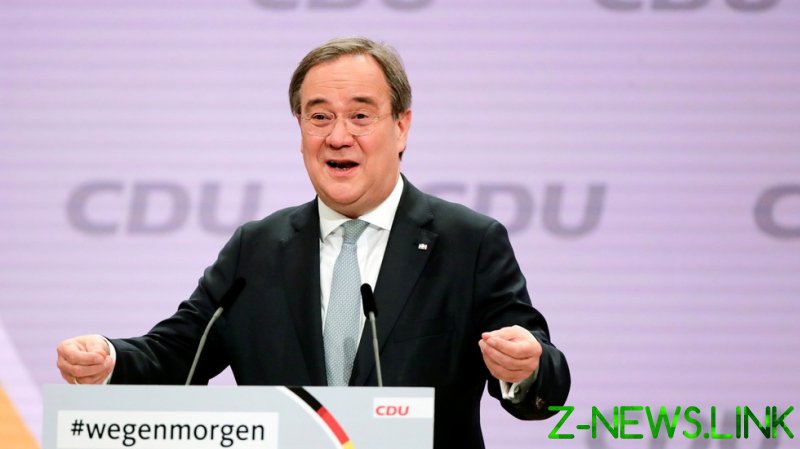 The first-ever digital election was held by CDU on Saturday, with Laschet defeating his main contender, hardliner conservative Friedrich Merz, in a runoff ballot.

The centrist politician and self-styled Angela Merkel continuity candidate, Laschet, narrowly won the election scoring 521 to 466 votes. The digital election’s results will be further confirmed by a postal vote with final, legally binding results expected next week.Runner-up Merz congratulated Laschet, wishing him “success” as the leader of the party.

“It’s an important year that we have ahead of us, it will be a tremendously arduous time in the next weeks and months for all of us,” Merz stated.

Speaking after his victory, Laschet vowed to solidify the ties between the CDU and its Bavarian ‘sister-party’, the Christian Social Union (CSU), so that they could “stick together through this year,” signaling that the two parties will again run for the federal elections in September together. While the new CDU leader is likely to succeed Merkel as chancellor, Laschet abstained from making such a bid so far, merely stating that the CDU/CSU should work toward ensuring that “the next chancellor in the federal elections will be from the union.” Moreover, the CSU leader Markus Soeder is the most popular conservative politician among the Union’s voters, according to new polls cited by German media.

Soeder was among the first to congratulate Laschet, expressing eagerness to work together with the new CDU leadership.

“Together we will continue the Union’s success story,” Soeder tweeted.

Later in the day, Laschet also signaled that CSU might be seeking a broader alliance, promising to talk to all other democratic parties in Germany insisting that the democrats must stick together during these challenging times and promising to “fight” those seeking to harm democracy.

“Especially in these days that we are experiencing in the world, the phrase ‘unity, justice and freedom’ is more topical than ever,” he said. “Let us fight together for these principles against all those who want to endanger them.”

Outgoing German Chancellor Angela Merkel stepped down from her role as the CDU leader late in 2018, leaving the party locked in a power struggle. Her protegee, Annegret Kramp-Karrenbauer, managed to win the seat in the 2018 party elections, narrowly beating Merz, yet her term turned out to be short-lived. Kramp-Karrenbauer announced her resignation as the party’s leader on February 10 2020 in the aftermath of the Thuringian crisis. The political scandal revolved around the cooperation of some of the CDU lawmakers in Thuringia with the right-wing Alternative for Germany (AfD), going against the party’s leadership’s wishes. A conference to elect a new CDU leader, however, was later postponed due to the ongoing Covid-19 crisis.