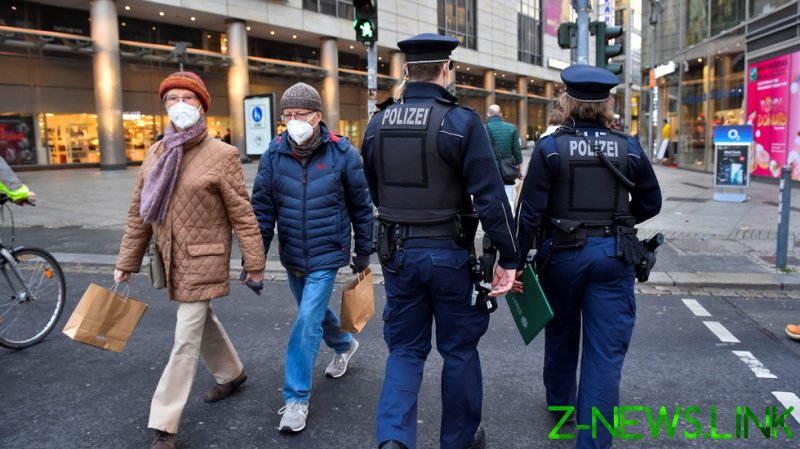 On Thursday, Germany’s regional premiers agreed with outgoing Chancellor Angela Merkel to introduce harsh restrictions on those unvaccinated against Covid-19. Merkel had called on the heads of Germany’s 16 federal states to decide on new nationwide restrictions on Thursday; throughout the pandemic, state leaders have been largely free to decide their own Covid measures.

Under new restrictions, unvaccinated individuals will be barred from restaurants, theaters, and non-essential stores. Nightclubs are also to be closed in areas where infections are high, while large-scale events will see the number of spectators reduced.

Only 50 vaccinated and recovered people are allowed to meet indoors. Up to 200 people can meet outside.

Merkel spoke of an “act of national solidarity” that is now needed to reduce infections.

The chancellor said that mandatory vaccination could be enforced from February. She added that such a measure would require the agreement of the Bundestag and an appropriate legal framework.

Speaking on Thursday, outgoing Health Minister Jens Spahn told ZDF television that the plan was essentially “a lockdown for the unvaccinated.” “The more than 12 million adults who aren’t inoculated is what is creating a challenge for the health system,” he added.

Germany has reignited its vaccination campaign amid soaring case numbers. However, only 68% of the population are fully inoculated against the virus, below the average for western Europe.

According to the Robert Koch Institute of infectious diseases, Germany registered 73,209 new Covid-19 infections and 388 deaths on Wednesday.

Neighboring Austria has been completely locked down for three weeks. A ten-day lockdown from November 22 has been extended for a further ten days, now lasting until December 11. The country had previously only locked down the unvaccinated.

Chancellor Alexander Schallenberg apologized to vaccinated citizens for the tough restrictions. Austria will mandate Covid-19 vaccines from February 1, becoming the first country in Europe to introduce such a measure.