Home / WORLD / Germans vote in historic election, with Angela Merkel set to step down after 16 years in power

Germans vote in historic election, with Angela Merkel set to step down after 16 years in power 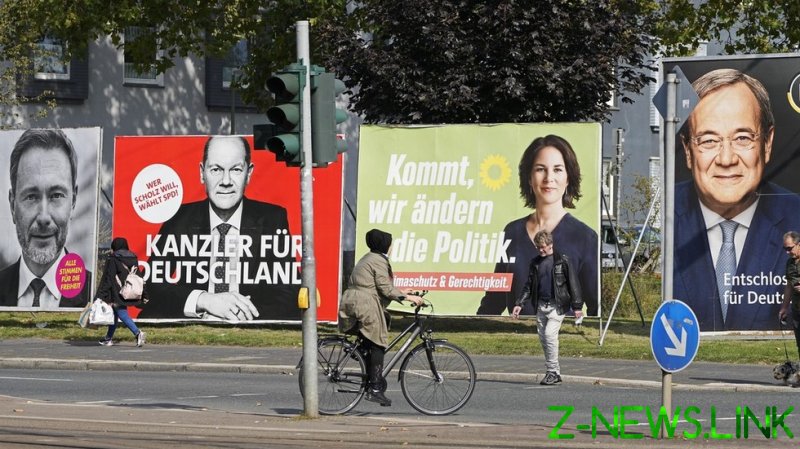 Polling stations opened across Germany on Sunday morning, with just over 60 million people eligible to vote.

The Bundestag officially has 598 seats, and all of them are being contested on this occasion. The actual number of seats may vary, however, due to the country’s complicated parliamentary system, which also features so-called leveling and overhang seats.

The end of the Merkel era

The election is the first in nearly 16 years not to feature Germany’s biggest political heavyweight, Chancellor Angela Merkel, who has served as chancellor since 2005. She first announced she would not seek reelection back in 2018, and her party, the Christian Democratic Union (CDU), has suffered a series of setbacks in regional elections since then.

The ongoing coronavirus pandemic has further eroded support for both the center-right CDU and its Bavarian sister party, the Christian Social Union (CSU), which are often referred to jointly as ‘the Union’.

The subsequent battle to represent the CDU/CSU as a candidate for chancellor was won by Armin Laschet, premier of the industrial North Rhine-Westphalia region, who only narrowly beat his Bavarian rival, Markus Söder.

Laschet’s campaign has suffered multiple gaffes, the worst occurring in July, when he was filmed laughing while President Frank-Walter Steinmeier was delivering a speech in a town devastated by catastrophic flooding. The incident dented Laschet’s image, further contributing to the CDU/CSU’s ratings decline.

Tight race with no clear winner

In early September, the Union’s support hit a record low of 20% – far below the nearly 33% result it achieved in the 2017 election. Meanwhile, its main rival, the center-left Social Democratic Party (SPD), led by Olaf Scholz, surged to 26% support in mid-September.

As of Friday, polls show the two main contenders separated by just 3%, with the SPD taking a slim lead with 25% and the CDU/CSU garnering around 22% support.

Neither side is expected to emerge from Sunday’s vote with an outright majority, and when polling stations close, the frantic business of coalition-building will begin. It took six months for the current CDU/CSU/SPD coalition to come together after the 2017 elections, and new alliances will likely be hammered out this time around, especially without Merkel in the picture to play a linchpin role.

An alliance between the CDU/CSU and the Greens has been predicted by pundits for months. With climate change the most important issue for German voters, the Greens are currently polling at between 14% and 16%, nearly double the 8.4% share they got in 2017.

However, with the SPD surging in popularity, Scholz’s party could woo the Greens away from the CDU/CSU with a three-way alliance involving the Linke party, currently polling at around 7%.

However, most of Germany’s political establishment balks at working with Linke, which is widely seen as the descendant of the old East German Communist Party.

Merkel has stepped in personally in a bid to prevent this, warning parliament earlier this month that the country may be headed for a left-wing coalition government. The chancellor bluntly warned against this, urging voters to show more support for her embattled successor, Laschet, who, she said would form a “federal government that leads our country into the future with moderation.”

In an uncharacteristic rebuke to the SPD, her coalition partners since 2013, Merkel said citizens faced a choice between a moderate government and one that might see the SPD accept the support of Linke and the Greens.

Laschet struck a similar tone, as he grilled his rival Scholz during a series of television debates. “You have to have a clear position on the extremists,” he said, referring to Linke. “I don’t understand why it’s so hard for you to say, ‘I won’t enter into a coalition with this party.’”

The prospect of the emergence of a left-wing coalition including Linke is far from certain, however. While the party itself signaled its readiness to partner with the SPD and the Greens, Scholz has said his preferred coalition would be with the Greens, and has previously described Linke as unfit for government.

The CDU/CSU could counter an SPD/Green coalition by bringing in both the Greens and the liberal Free Democratic Party (FDP), currently polling at around 12%. However, such a coalition would be complicated by the FDP’s economic libertarianism, which would clash with the debt-financed spending pushed by the Greens.

The growth of the Greens has been paralleled by the rise of the anti-establishment Alternative For Germany (AfD). Currently the third-largest party in the Bundestag, AfD is polling at around 12%. The party made a name for itself by vocally opposing Merkel’s “open doors” immigration policies, and has positioned itself as a champion of the relatively disadvantaged east, protesting the planned closure of coal mines and calling for urban regeneration.

However, climate change has topped immigration as a voters’ main concern, and although it is the country’s third-largest party, AfD has no realistic path to power, with all other parties ruling out a coalition with the right-wing force.