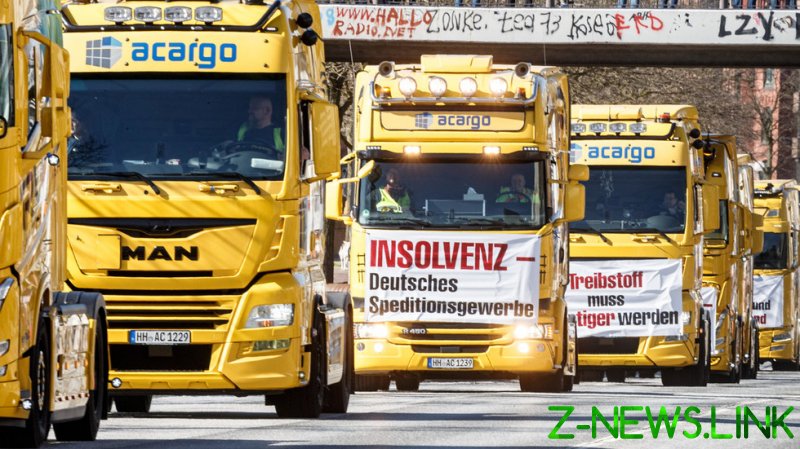 A convoy of truckers deliberately blocked traffic in Hamburg, Germany over the weekend, as part of a protest against high fuel prices. Police reported that around 250 vehicles were involved in the demonstration, while the hauliers disputed the figure, claiming up to 350 vehicles took part.

Banners attached to the trucks declared “Systemically relevant truckers need fair diesel prices” and “Diesel rip-off: Without us, this country would be on the ground,” as the truckers moved from Hamburg-Allermohe towards the city center.

The protests created traffic delays for a second weekend in a row, with a protest the previous weekend having seen 500 participants moving through the city to create chaos on the roads.

The German Fishing Association also claimed on Tuesday that the price of marine diesel has doubled in recent weeks. Higher fuel costs have hit truck drivers in Hamburg, causing operational issues for drivers and companies that rely on the vehicles to transport produce across Germany and other nations.

Fuel costs have increased in Germany and in other Western nations in recent weeks following Russia’s military assault on Ukraine. Sanctions imposed on Moscow have impacted the flow of oil and gas from Russia, sending costs in the West spiraling upwards and forcing nations to seek out alternative supply routes to satisfy their dependence on foreign fuel.

The protest on Germany’s roads contrasted with another demonstration in another part of the country, by climate protesters Fridays for Future, who unveiled a 400-square-meter banner calling for a “Climate Strike” on March 25. The group stated that there is an “urgent need” for action to address the impact of climate change, including the levels of fuel usage in various countries.