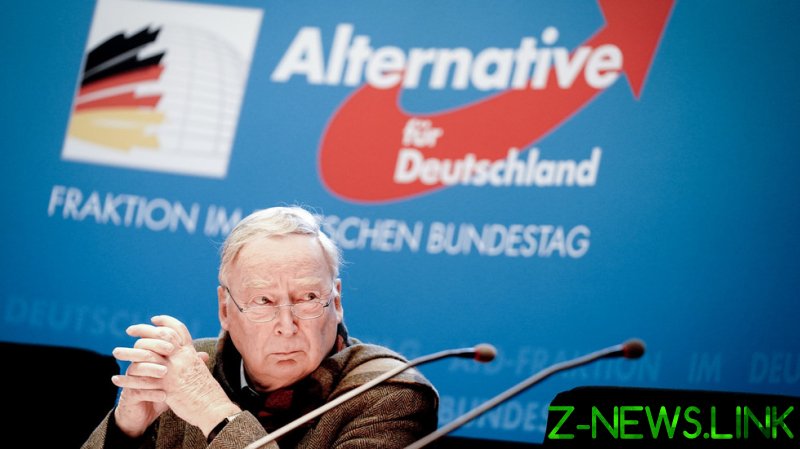 The party has filed two legal complaints and two emergency motions against the Federal Office for the Protection of the Constitution – a domestic security agency known as BfV – the German dpa news agency reported. The move followed a series of media reports suggesting that BfV could formally declare the whole party a suspected extremist organization.

Such status would allow security officials to put all party members under covert surveillance through informants as well as monitor all of the party’s communications if it gets parliamentary approval. The AfD also argues that such status would discourage the voters from supporting that party and would greatly harm its election results as Germany heads towards the national and regional parliamentary votes in September.

“It is completely obvious that the AfD does not give the [BfV] the slightest reason to classify it as a suspected case,” the party’s head, Joerg Meuthen, told the German media. Earlier, the party also issued a special declaration where it said it “unconditionally acknowledges the German People as the community of all persons who have German citizenship.”

The BfV, however, apparently has its own reasons for such a decision. The organization turned its attention to AfD back in January 2019 when it declared the party’s youth wing and its arguably more radical faction led by one of its regional leaders, Bjoern Hoecke, as “suspected” extremist groups.

In March 2020, the BfV, changed the status of Hoeke’s ‘The Wing’ from ‘suspected’ to proven extremist group, forcing him to formally dissolve it. Yet, the security service still believes that the former members of this faction still have a strong hold on the party that continues to “drift towards the far-right.”

According to the German media reports, security officials have complied a whopping 3,000-pages-long report detailing its findings related to the party’s links to various far-right groups and controversial activities of its members.

According to the German Der Spiegel weekly, the Interior Ministry is currently examining the BfV’s opinion since it should greenlight the move before the designation would be made public.

The AfD meanwhile demands the court ban the BfV from publicly declaring the party a “suspected extremist group” as well as disclosing information about the number and the identities of the former ‘Wing’ members within its ranks. Among other things, the party invokes its right for equal political opportunities as well as maintains that the legal conditions for such designation are not met.

“Should the BfV officially declare the AfD a suspected case, we will use all legal means to counteract it – and to be successful in the foreseeable future,” said Meuthen, adding that “the legal and factual prerequisites that are absolutely necessary for surveillance are simply not there.”

Most recently, AfD has emerged as a vocal critic of Chancellor Angela Merkel’s Covid-19 lockdown policies and was in turn accused of having links to Covid-19 deniers and conspiracy theorists. In October, Alexander Gauland, leader of the AfD in parliament, accused Merkel’s government of a “corona dictatorship.” Merkel, in turn, slammed the “lies, disinformation and conspiracy theories” that damage democratic debate.

In November, the AfD also compared the lockdown to the 1933 Enabling Act, which granted Adolf Hitler the power to rule by decree. The move earned a bitter rebuke from Foreign Minsiter Heiko Maas, who called it an “opprobrious comparison” mocking the victims of the Nazis.