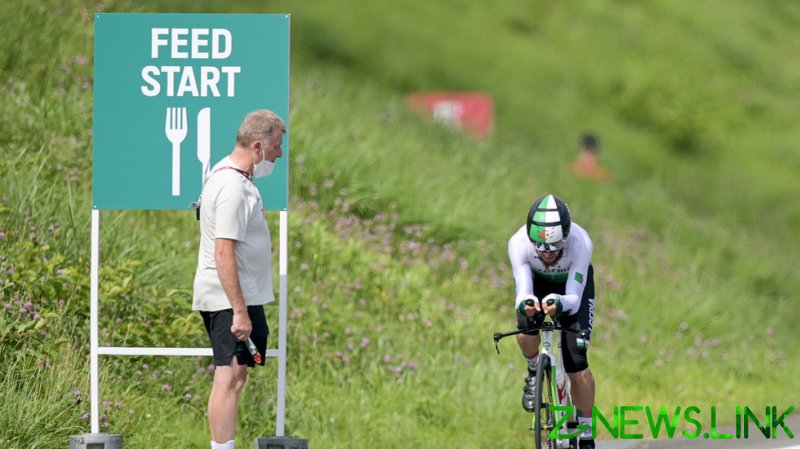 The confederation announced the disciplinary action on Thursday, despite Moster having said he was sorry. Its president, Alfons Hörmann, stated: “We remain convinced that his public apology for the racist remarks he made yesterday is sincere,” but made it clear that he had violated the Olympic values. “Fair play, respect, and tolerance are non-negotiable for Team Germany,” the statement said.

Moster’s offensive comments were captured live as he urged the rider Nikias Arndt to catch up with his opponents Eritrea’s Amanuel Ghebreigzabhier and Algeria’s Azzedine Lagab.

Lagab reacted calmly to the racist remarks, tweeting: “Well, there is no camel race in #olympics – that’s why I came to cycling. At least I was there in #Tokyo2020.”

Team Africa Rising, an organization striving to promote African cycling across the continent, took to Twitter to express its disgust in no uncertain terms, however: “This is completely unacceptable and an apology is not enough.”

Arndt was also categoric in his response to the scandal, tweeting: “I am appalled by the incidents at today’s Olympic time trial and would like to distance myself clearly from the statements of the sporting director! The Olympics and cycling stand for tolerance, respect and fairness.” He added that he supported such values “100%.”

After the race, Moster apologized for the slurs, telling German media: “In the heat of the moment, and with the overall burden that we have here at the moment, my choice of words was wrong.”

This is not the first racism scandal to hit the Tokyo Olympics. This week, Greek commentator Dimosthenis Karmiris was sacked after making inappropriate remarks live on air about the South Korean table tennis player Jeoung Young-sik. He said: “Their eyes are narrow, so I can’t understand how they can see the ball moving back and forth.”

Before the games even started in earnest, a South Korean TV channel had to apologize for inappropriate graphics used during its broadcast of the opening ceremony, in which it had used an image of Chernobyl to represent Ukraine and a photo of civil unrest to represent Haiti.