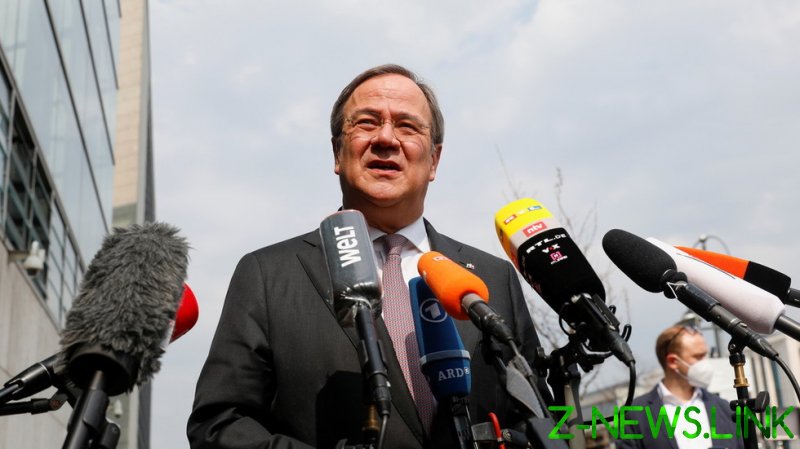 The CDU executive board held a six-hour virtual debate on Monday evening to discuss whether to nominate Laschet or CSU leader Markus Soeder as the alliance’s candidate to replace Angela Merkel as leader of the German government. Merkel is not seeking re-election and has distanced herself from the process of selecting her would-be successor. Her Christian Democrats (CDU) and the Bavaria-based Christian Social Union (CSU) traditionally run as a single unit, dubbed ‘the Union’, in general elections.

Both Laschet and Soeder had voiced their desire to run for chancellorship in September, but had pleaded to maintain unity between the two sister parties. The CSU leader said he would agree with whoever the CDU executive board selected. The vote reportedly went overwhelmingly to his opponent, with 31 out of 46 members preferring Laschet. Soeder received nine votes while six people abstained, according to party sources cited by local media.

By choosing 60-year-old Laschet over 54-year-old Soeder, the Union may have undermined its ultimate goal of maintaining political power in Germany for four more years. Opinion polls show that the Bavarian politician has more grassroot support among voters, while there is a strong challenge in the election from other parties.

The Greens, who enjoyed a rapid growth in popularity this year, have a serious chance to win the chancellorship for the first time in their four-decade history. The party trails in second place after CDU/CSU in opinion polls with a single-digit margin. Co-leader Annalena Baerbock was selected as the party’s candidate on Monday.

Laschet, a long-time Merkel loyalist, was elected as chair of the CDU in January, taking the helm from Annegret Kramp-Karrenbauer. She got the job in late 2018, after Merkel announced her intention to retire, and was presumed to be the eventual candidate for chancellor at the time. But the CDU’s poor performance during a European Parliament election and a major political scandal in 2020 undercut Kramp-Karrenbauer’s rise to power.

The incumbent CDU chairman is a strong proponent of EU integration, which may work against him in September. A major factor behind his party’s loss of popularity is the chaotic roll-out of Covid-19 vaccines, which many Germans attribute to their government’s relegation of the procurement process to Brussels.