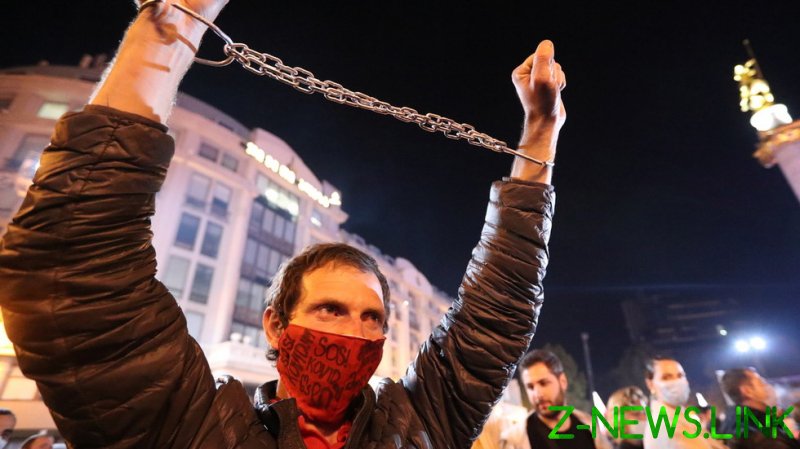 The warning about a brewing Maidan-style coup in Tblisi came on Saturday from Georgia’s State Security Service. It said supporters of the former president have planned disruptive protests in the capital starting this weekend.

The protesters will allegedly block government buildings, major roads, and the prison in which Saakashvili is currently serving his sentence, the statement said. The organizers “are actively discussing the possibility” of recruiting “certain officers of law enforcement agencies” and the “assassination of one of the leaders of the opposition,” it claimed.

The ultimate goal of the plot, which Georgian law enforcement said was being implemented under the personal direction of Saakashvili, is to violently overthrow the government.

The US-backed leader’s stint at the helm of Georgia started with the Western-sponsored mass protests of 2003 that forced his predecessor Eduard Shevardnadze to resign. Saakashvili’s two terms in office were marked by much-lauded sweeping reforms and modernization, but also a brutal crackdown on the opposition, and a disastrous 2008 military offensive on the breakaway region of South Ossetia. The latter involved heavy shelling of the city of Tskhinvali, in which Russian peacekeepers were killed, and ended in a humiliating defeat and Moscow’s formal recognition of the independence of two breakaway regions of Georgia.

After fleeing the country in the wake of a 2013 ballot box loss, Saakashvili reinvented himself as an official in post-Maidan coup Ukraine, where he was given citizenship, but was ultimately pushed out of politics there. His home country tried him in absentia on charges related to violent suppression of mass protests and graft, sentencing him to a prison term of nine years.

Saakashvili smuggled himself back into Georgia in early October but was promptly arrested and put behind bars. Tbilisi refused to hand him over to Kiev, saying he would serve his sentence at home. The politician has declared a hunger strike and called on his supporters to pressure the government into releasing him from what he calls unlawful imprisonment.