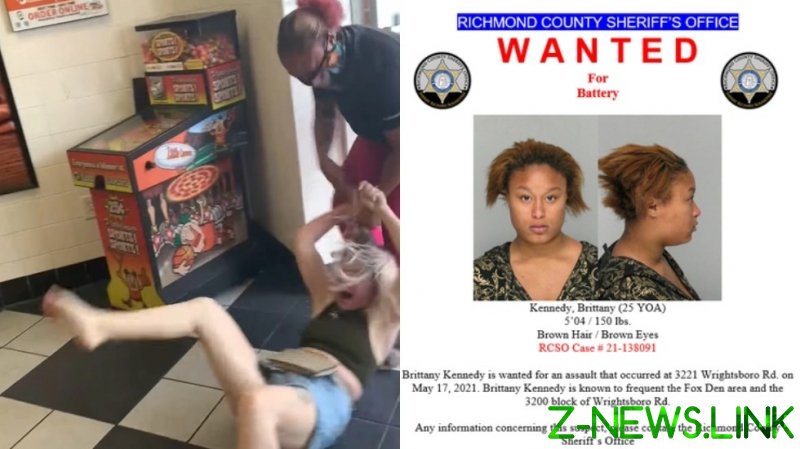 The suspect, a black woman identified as 25-year-old Brittany Kennedy, entered the restaurant on Monday and was seen confronting the victim, 22-year-old Emily Broadwater, who is white. According to a police report seen by Augusta Crime, Kennedy pulled Broadwater’s chair out from under her, grabbed her by the hair, and dragged her across the restaurant.

What happened next was caught on camera by a bystander, and makes for grizzly viewing. Holding Broadwater by the hair, Kennedy repeatedly punches the woman in the head, before dragging her through the front door of the restaurant to continue the assault outside. There, Kennedy throws Broadwater to the ground and stamps on her head.

After Kennedy leaves, a bloodied Broadwater stands up, calling out for “my baby.” Near the beginning of the video, a toddler attempts to intervene and is pulled back by a bystander.

It is unclear if the child is the baby Broadwater cries out for at the end of the video. It is also unclear what prompted Kennedy’s outburst. However, social media posts cited by some media outlets suggest that Broadwater had been looking after Kennedy’s child while Kennedy was in jail, and the pair were in some kind of dispute over guardianship.

Shockingly, nobody in the restaurant attempts to break up the fight. One person even appears to hold the door open as Kennedy drags her victim outside.

Little Caesers told WJBF-TV afterwards that it advises its crew members to “call the police immediately” in such situations.

Richmond County Sheriff’s Office published a wanted poster for Kennedy on Facebook on Tuesday, noting that she is wanted for battery. Battery is a misdemeanor offense in Georgia, punishable by up to a year in jail or a fine of up to $1,000.