Home / WORLD / George W. Bush is HEARTBROKEN over Biden’s decision to withdraw troops from Afghanistan, frets over dangers to women and girls

George W. Bush is HEARTBROKEN over Biden’s decision to withdraw troops from Afghanistan, frets over dangers to women and girls 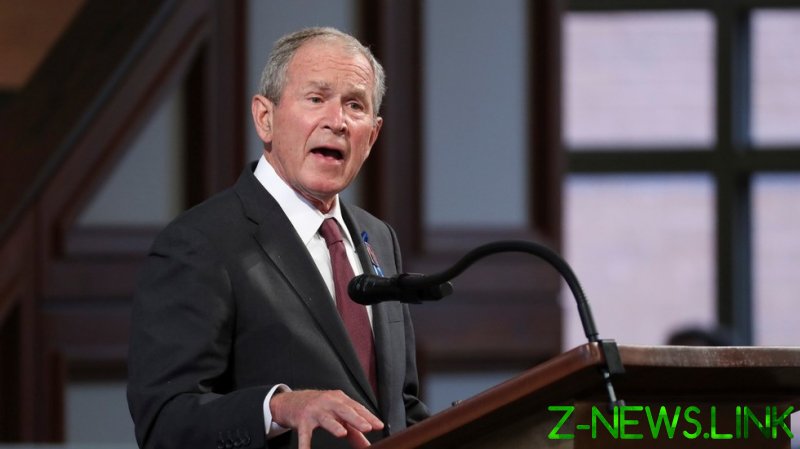 Instead, Bush said in an interview released on Wednesday by Germany’s DW media outlet that he fears the “unspeakable harm” that Afghan women and girls may suffer as the Taliban retakes control over large swaths of the country. He also worries over the interpreters who assisted US forces.

“They’re just going to be left behind to be slaughtered by these very brutal people, and it breaks my heart,” Bush said.

President Joe Biden, who announced the withdrawal of US troops from Afghanistan in April, reportedly plans an operation to evacuate Afghan translators to the US. The US exit is scheduled to be completed by the end of August. Biden’s predecessor as commander-in-chief, Donald Trump, had planned to get the troops out by May.

Following the Sept. 11 terrorist attacks in 2001, Bush sold what became America’s longest war as attacking Al-Qaeda and Taliban operations to disrupt the use of Afghanistan as a terrorist base. Mission creep in his mind apparently expanded at some point to include the civil liberties of Afghan women.

In fact, Bush said in the DW interview, which focused largely on his relationship with Angela Merkel, that the German chancellor agreed to join in the war effort at least partly because “she saw the progress that could be made for young girls and women.” He added, “It’s unbelievable how that society changed from the brutality of the Taliban.”

Bush called the Western troop withdrawal a mistake and speculated that Merkel likely agrees. “I think the consequences are going to be unbelievably bad,” he said.

Prior to Barack Obama and Trump, it used to be a tradition for former US presidents to avoid publicly criticizing their predecessors. Bush has largely followed that unwritten rule, so his rebuke of the Afghan withdrawal is a rare exception.

Human rights lawyer Qasim Rashid, a former Democrat congressional candidate, pointed out that Bush authored wars that have killed thousands of women in Afghanistan and elsewhere. “Someone remind Bush that his post-9/11 wars have displaced 37 million civilians and killed over 1 million civilians, disproportionately women and children,” he said, citing figures from the Cost of War Project. “Where’s the accountability for such atrocity?”

The Taliban has already retaken strategic territories in Afghanistan, including border crossings with Iran, Pakistan, Tajikistan and Uzbekistan. Surrendering Afghan troops have been slaughtered in some cases, including 22 Special Forces soldiers who were executed in an atrocity caught on video. In one case, more than 1,000 Afghan troops fled into Tajikistan to escape being overrun by the Taliban.

Afghanistan’s commanding army general, Sami Sadat, said on Monday in an NPR interview that Afghans feel abandoned by the US. American forces earlier this month left the Bagram Airfield, formerly the largest base for the Western war effort, without even notifying the installation’s Afghan commander.