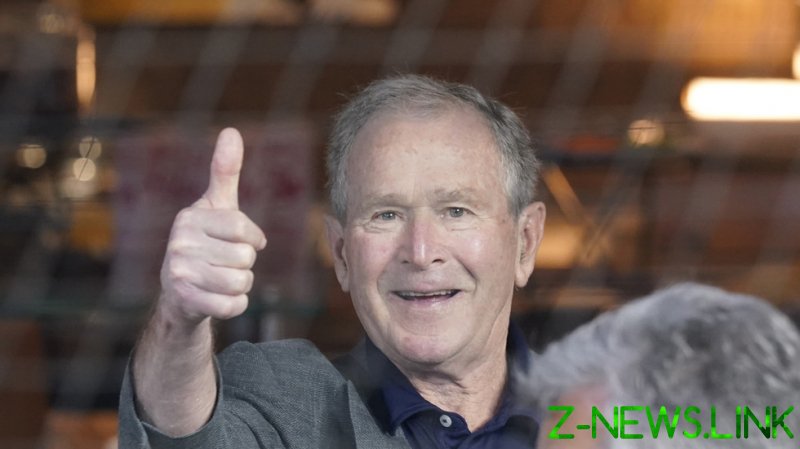 Former US President George W. Bush inadvertently condemned the “invasion of Iraq” while blasting Russia’s attack on Ukraine, a slip-up which he blamed on his old age.

Speaking in Dallas on Wednesday for an event hosted by the eponymous George W. Bush Institute, the ex-commander-in-chief railed against the Russian government under President Vladimir Putin and his decision to send troops into Ukraine in late February.

“The result is an absence of checks and balances in Russia, and the decision of one man to launch a wholly unjustified and brutal invasion of Iraq – I mean of Ukraine,” he said, drawing laughs from the audience as he again murmured “Iraq” under his breath. He attributed the mistake to his age, saying “I’m 75” before continuing the address.

Bush went on to praise Ukraine’s leadership as the fighting in the country continues into its third month, at one point dubbing President Volodymyr Zelensky a “cool little guy” and “the [Winston] Churchill of the 21st century,” comparing him to the famous British wartime leader.

As president, Bush launched the 2003 invasion of Iraq which quickly toppled the government in Baghdad and transformed into a lengthy military occupation. Up to 209,000 civilians were killed in the resulting fighting, according to the Iraq Body Count project, along with nearly 4,500 American soldiers and thousands of additional casualties indirectly linked to the war.

Before ousting Iraqi President Saddam Hussein, the Bush administration repeatedly claimed to have intelligence showing that Baghdad had not abandoned efforts to develop weapons of mass destruction following the 1991 Gulf War. Those claims were later proven inaccurate, however, as US forces failed to uncover any ongoing WMD projects despite intensive inspections.

More than 19 years later, around 2,500 US soldiers remain in the country, though they now serve in non-combat roles with the permission of the local authorities. In March, General Frank McKenzie – then the head of US Central Command (CENTCOM) – suggested the American military presence would not end anytime soon, citing the alleged threat posed by militia groups supported by Iran.

READ MORE: America’s selective outrage over Ukraine is fashioned by a well-oiled propaganda machine… just ask the people of Yemen