Home / WORLD / George Galloway: There should be no police violence in Scotland, whether RT is filming it or not

George Galloway: There should be no police violence in Scotland, whether RT is filming it or not 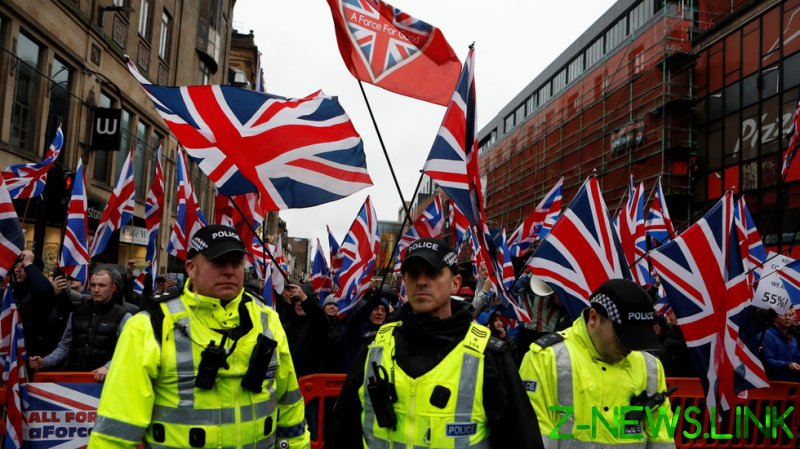 “Hostile foreign media – most obviously RT – are apt to provide live coverage of sensitive events (e.g. protests) and to amplify grievances of any disaffected group,” reads the document.

The Times of London, in its coverage of the story, notes that “RT employs prominent figures in Western countries – such as Alex Salmond and George Galloway – to build a domestic audience and make them more receptive to Russian propaganda.”

The article adds that RT “is used by the Kremlin to destabilise Western democracies by aggravating rivalries, such as Brexit in the UK”.

Firstly, there is precious little police violence in Scotland. Secondly, if there was, there shouldn’t be, whether the Russians are watching or not, right?

Secondly, the gratuitous reference to RT, to Alex Salmond and to me simply makes no sense. It’s based upon the premise that we seek to do down Britain, but Salmond’s show literally never ever does so. And as for me…

I want to do down Britain so much I’m spending every waking moment trying to save it from falling apart, from the secession of half of its territory, from partition! I fought for Britain in the Great Brexit debate and I’m now deep into round two of my fight against separatism. And much of what I say and write, I say and write on RT.

I abhor riots such as the one in Bristol last weekend. Riots go up like a rocket, but they come down like a burnt stick. They destroy other people’s property that they worked hard to build, or they destroy public property that all of us worked hard to build. The difference is that I’m against it everywhere. Cheerleaders of the wrecking violence in Hong Kong or Ukraine have little room to tut about similar wreckage in Bristol.

The British police are not especially violent compared to those elsewhere, as anyone who’s ever been on a protest in France already knows. Our officers are not routinely armed, unlike most forces in the world. They take the knee for BLM, dress up in rainbows for Pride, and do the rumba at the Notting Hill Carnival. In fact, they don’t even call themselves a ‘force’ now, but rather a ‘service’.

But a news service that does what it says on the tin, that brings you the news rather than suppressing it or edging it out with royal rumpuses and celebrity gossip, is to be welcomed, no?

When police officers or firefighters or ambulance workers come under fire from rioters and miscreants of all kinds, public sympathy is overwhelmingly on the side of the uniformed, as it rightfully should be. Does that mean the news of what happened should be switched off? No. What good would that do?

Scotland is a place where freedom of speech is already under severe attack. The new Hate Crime Bill will leave someone open to prosecution for hate-speech offences even in their own home! If your kids report you for your views on transgenderism – the driving issue behind the new law – you can expect a visit from hard-pressed Police Scotland, which has already told us it doesn’t have the resources to act on the bill. Nonetheless, officers will be forced to act, even if they have to leave other law-breakers alone to do so.

If they turn up at your door and an argy-bargy develops as you insist that a Scotsman’s home is his castle, you’d better hope there’s an RT camera there to film it, for there sure won’t be anyone there from the ‘woke’ BBC!