Home / WORLD / George Galloway: Kiss of death – The winner of the most coveted Henry Kissinger endorsement is… Joe Biden

George Galloway: Kiss of death – The winner of the most coveted Henry Kissinger endorsement is… Joe Biden 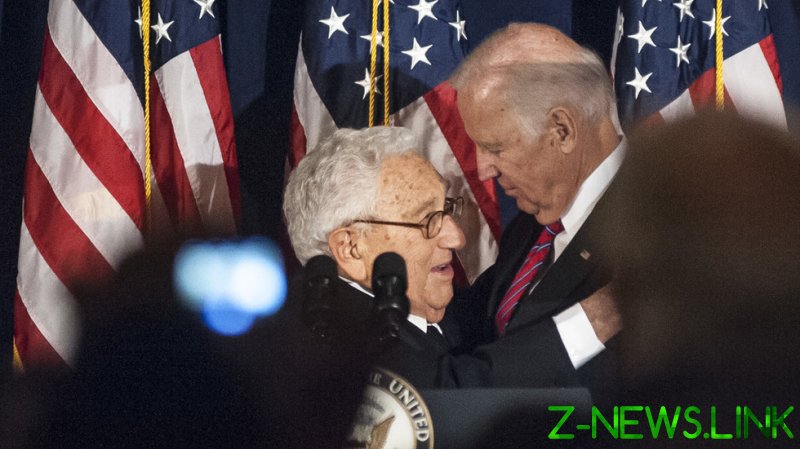 No matter what happens in the Supreme Court, Joe Biden will always have Henry Kissinger.

The oldest-living war criminal – Kissinger, not Biden – has made clear his preference for the oldest living senator (Biden claimed during the campaign he’d been in the Senate for 180 years) and perhaps come January the oldest ever president to take the oath.

You may not share my religious beliefs, but I consider the continued sulphurous presence of Henry K proof of Satan’s existence on Earth. To my mind, no man since Hitler has more blood on his hands than Kissinger.

But I must declare an interest.

Kissinger has killed a lot of friends of mine, beginning in Chile in 1973. He killed a lot of children who look like my children, in Vietnam, Laos, and Cambodia. And he is a personal role model of Tony Blair, to whose incarceration for war crimes and crimes against humanity my own life is now dedicated.

From the killing fields of Indo-China, through the years of living dangerously in Suharto’s Indonesia, to the ruins of La Moneda and corpse of Salvador Allende, and to the ghost city of Quneitra in Syria. There is, in fact, no operating theatre of bloody colonialism since the 1960s in which he hasn’t been so steeped in blood that a commemorative statue wouldn’t have been in order. And he’s backed Biden.

The “vulgarity” of Donald J. Trump was just TOO much for Henry K.

To Business Insider, “the most famous Secretary of State the US has had” revealed “I like Joe Biden,” whom he described as “thoughtful and moderate.” Just like himself, in fact.

When Biden bombs it will be with regret rather than relish. They will be humanitarian bombs, just like Barack O’Bomber’s were. That there will be rather more of them, and in fresh countries too, is something, dear reader, you will have to prepare yourself for.

There will be no “Muslim ban,” just the continuation of Muslim-bombing. Including a resumption of Muslim-bombing in the likes of Syria. But these bombers, at least, will be adorned with Black Lives Matter paraphernalia and maybe the rainbow flag painted on their tail-fins for good measure.

No more coverage of “kids in cages,” but plenty of kids in coffins.

From Yemen (a genocidal war begun by the Obama-Clinton-Biden gang) to Idlib (the dirty war started by the same gang, which spawned the death cult of ISIS). From the jungles of Venezuela to conflicts yet unborn, Biden will be there with Hillary Clinton – the laughing assassin of Gaddafi – and her witches Susan Rice and Samantha Power, cackling as they stir the pot. Hubble bubble toil and trouble is the stew on the menu now, and old Mephistopheles Henry Kissinger will be in all the selfies.