George Galloway: Here’s why there WON’T be a second referendum on Scottish independence anytime soon 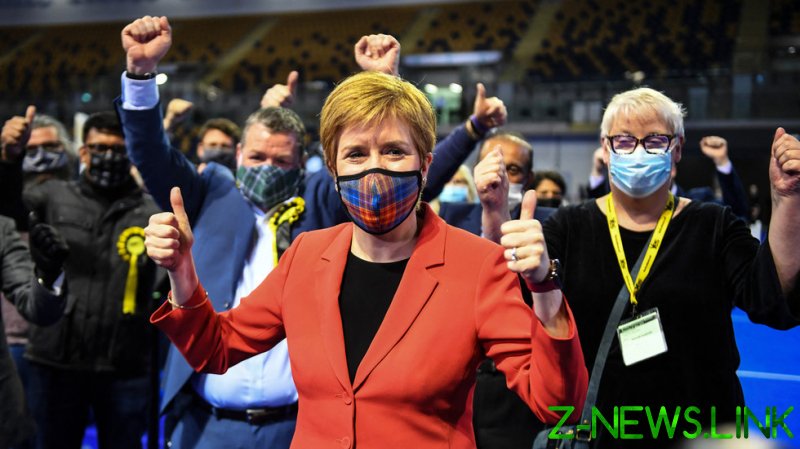 Despite the best efforts of the BBC, which has forgotten what the first B in its name stands for, the separatist Scottish Nationalist Party has failed for the second election in a row to win a majority in the Scottish Parliament.

The BBC, which over Brexit and the Union has proved it hates the Crown while living on the half-Crown, described this as a “triumph” but it’s far from that.

The now anathematised Alex Salmond left his successor Nicola Sturgeon a parliamentary majority but she has, twice, thrown it away. Along the way, he has been airbrushed out of her history and, but for the good sense of a jury, could’ve now been just a year into an eight-year stretch in prison (at the age of 66).

In fact, Scotland now has a government more than two thirds of us didn’t vote for. Only 31% of Scots voted for the SNP last Thursday. More voters backed the unionist parties than backed the separatist ones.

But for the bovine dogmatic insistence of the pro-union parties in fielding no-hope third and fourth placed candidates and splitting the union vote, the SNP would’ve been put to the sword. In contest after contest, SNP candidates survived and were elected ONLY because of split-unionist voting.

None of this a “triumph” makes far less a mandate to have a second go for secession. Despite all the bluster, that is the long and short of it.

The Union is not just ill-served by the unionists at Holyrood but by the Conservative and Unionist government at Westminster.

The British state has stood by while massive maladministration – at best – of UK state funds has taken place in Scotland. Billions of UK pounds are unaccounted for. Not distributed as intended, but distributed in suspiciously partial ways, turned into meretricious election bribes, sunk into massive loss-making ventures some of which would be eye-watering in a huge country, never mind a country of five million people. Some of which may involve fraud.

The civil servants administering all this are UK civil servants – the civil service is not devolved – and they have all the receipts (or must account for the lack of receipts), but there is no sign that Her Majesty’s government has asked to see them. Perhaps such matters are too close to home for Boris Johnson and it suits him not to probe too deeply…

So, there will NOT be a second Independence Referendum in the lifetime of this parliament. There is no “mandate” for one (and neither could there have been one, such matters being reserved to Westminster). No Supreme Court will overturn the constitution of the UK at the behest of a minority government with a minority of votes cast and less than a third of the people behind them. And any expenditure on such a court case would have to be borne by the SNP not the Scottish Government, such spending being ipso-facto ultra-vires.

Neither will there be a “wildcat” illegal referendum. No local authority would be permitted to administer one, the courts would forbid it, and if held in the streets the unionists to a man and woman would boycott it.

What there will be, however, is another five years of caterwauling about “independence” (a misnomer as the SNP seek early admittance to the European Union). The SNP will continue to fiddle while Scotland burns.

The worst drug deaths in Europe. Collapsing educational attainment. Chronic unemployment and underemployment (fewer than half of all Scots qualify to pay income tax and half of that half are paid by the taxes of the other 25%). Misgovernance of the legal system shown not only in the Salmond case but in multiple cases of “Malicious Prosecution” (their stated admission not my words). A Hate Crime Bill aimed at punishing the “unwoke” for things they say EVEN IN THEIR OWN HOME.

And, remember you read it here first, pending corruption allegations which will reverberate through this land and make the news in Timbuktu.