Home / WORLD / George Galloway: Both pro- and anti-independence leaders in Scotland are now RT hosts. Sturgeon may want to get out of the way

George Galloway: Both pro- and anti-independence leaders in Scotland are now RT hosts. Sturgeon may want to get out of the way 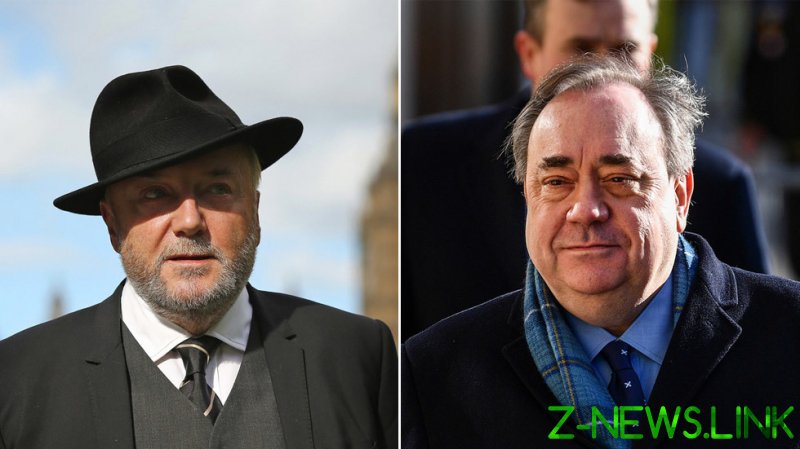 Just when Nicola Sturgeon thought it was safe to get back in the water, having engineered a highly dubious escape from a finding of breaking the Ministerial Code (which would have forced her resignation) involving a gallon or two of redaction black-ink, the bigger fish she thought she was rid of suddenly emerged for a draught of the oxygen of publicity. It was the king of fish, it was the Salmond.

He now leads a new party, Alba (the Gaelic name for Scotland), which will contest the Proportional Representation section of the election on May 6th in every region of Scotland. He says it’s to provide for a “super-majority” for Independence but in truth it represents a major decision within the pro-Independence camp. It may be Salmond’s final revenge for the plot which tried to put him behind bars on baseless sex-crime charges on which he was acquitted last year.

Its first consequence will likely be the wiping out of the ruling SNP’s Gardening-Section, a.k.a. the Scottish Green Party, which clings to the ruling party like moss to a dyke. They hold five seats in the parliament but only as the recipients of SNP voters throwing them enough of their second vote. Not only can the party no longer afford to lend votes to other people, a substantial number of Nationalists – perhaps a third – will defect to Salmond’s new vessel.

The Greens have been amongst Salmond’s persecutors in chief, supercharged “feminists” that they are (though four of their five members are men). The Greens have also driven the frankly inexplicable turn (for a Nationalist-Populist Party) to the widely unpopular transmania on gender-politics, alienating actual feminists and social-conservatives in equal measure.

The SNP response was swift and uncompromising. Out came all the bitter tropes about Salmond’s behaviour behind closed doors and a root-and-branch attack on his public motives.

Salmond, they said, was not acting for Scotland – he was out for revenge.

These motives are not mutually exclusive of course. Salmond believes that Sturgeon, even before she launched her assault on him two years ago, was a backslider on Independence – the SNP’s raison d’etre. Certainly she has struggled to fill his big shoes and it was surely the fear of him coming back and taking over the party’s leadership again which provoked the rupture in the first place.

A bitter six weeks of attrition between the two Nationalist wings will certainly light up the sky in Scottish politics. Much ordnance will be fired.

Salmond says he intends only a “positive campaign”, but this will prove impossible given the hatred already being fired from the ramparts of the SNP fortress, controlled ruthlessly by Sturgeon and her husband, the CEO of the SNP.

I have become the leading voice for preserving the union between Scotland and England and myself am leading a rival list in every region of the country, called All for Unity. Recent YouGov polling showed me to be, by a distance, the best-known opposition figure in Scottish politics. I will now have to share that accolade with my erstwhile House of Commons friend Mr Salmond. Two heavyweights, it will be pay per view.

But given the main target of both of us will be Nicola Sturgeon, she may be better staying out of the way as much as possible. If both Salmond and I are elected she may well have to throw in the towel.

I should mention before anyone else does that Nationalism and Unionism in Scotland are now both led by RT hosts. That Putin, eh, he thinks of everything. A two-horse race and he’s on both of them.