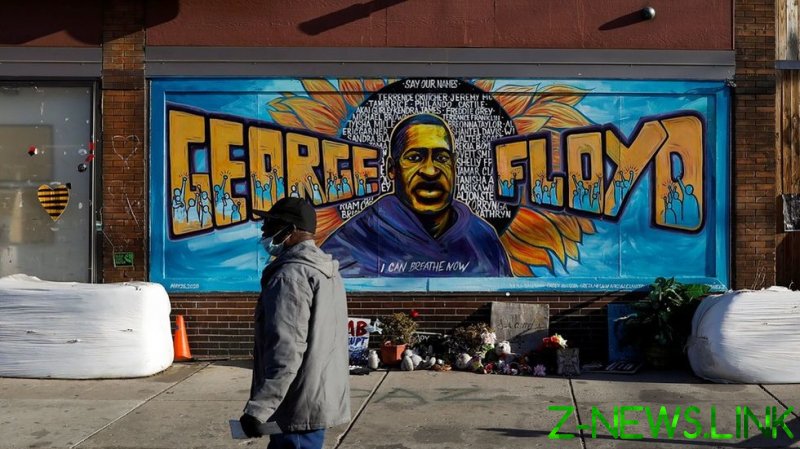 The attorneys’ memo joins a growing body of evidence in the murder case against Chauvin and was submitted following Thursday’s testimony from Floyd’s girlfriend Courteney Ross. She described the pair’s drug dealer, Maurice Hall, as the passenger in the car with Floyd when he was apprehended by the police.

Ross acknowledged that both she and Floyd had “regularly purchased controlled substances” from Hall. Both were on-again, off-again opioid addicts suffering from chronic pain who regularly turned to the black market when they could not get their drugs on prescription, she explained.

Crump appeared to be pushing back against the efforts of Chauvin’s lawyer Eric Nelson to claim Floyd, a fentanyl addict, died from an overdose of the powerful opioid. The 46-year-old security guard perished with multiple drugs in his system, including methamphetamine, in addition to the fentanyl. In his statement on Thursday, Crump pointed out that despite his client’s massive drug consumption, Floyd was “walking, talking, laughing and breathing just fine before Derek Chauvin held his knee to George’s neck, blocking his ability to breathe and extinguishing his life for all to see.”

However, video from one of the officers’ (not Chauvin’s) body cameras portrays the situation somewhat differently, showing Floyd repeatedly protesting he could not breathe several minutes before Chauvin pinned him to the ground with his knee for an excruciating eight minutes and 46 seconds.

The jury heard from several other witnesses this week, after Chauvin’s trial kicked off on Monday. Firefighter Genevieve Hansen, an eyewitness to the fateful events of Memorial Day 2020, became emotional as she described her frustration at being barred from performing the medical assistance she wanted to give Floyd, explaining she was prohibited from helping when the officers “didn’t let me into the scene.”

Another witness, Charles McMillian, broke down on the witness stand, explaining he – a stranger being “nosy” – had told Floyd to get into the police car because he “couldn’t win” against the cops in any other way. The 61-year-old had seen Floyd struggling for air and foaming at the mouth, and said he believed the stricken man stood the best chance of survival if he just “cooperate[d]” with the cops. McMillan added that a few days later, he ran into Chauvin in the street and was unable to hold his tongue, disparaging the ex-officer as a “maggot” because “what I watched was wrong” and he’d felt “helpless” to intervene.

MMA fighter Donald Williams, another witness, testified he “called the police on the police” because he did not feel the cops on the scene had Floyd’s best interest in mind. “We didn’t have no connection,” Williams told the court. “I spoke to them, but not on the connection of a human-being relationship.”

Floyd’s death was ruled the result of cardiac arrest, leaving possibilities open regarding the immediate cause of his demise. Chauvin’s lawyers have blamed his underlying health conditions and the drugs, while Crump and others arguing on Floyd’s behalf have insisted the dead man would still be walking around had he not had the altercation with the police.

Floyd was stopped by the officers after he attempted to pass a fake $20 bill at a convenience store in Minneapolis; the teenage cashier at the store testified on Tuesday, describing how he tried to get Floyd to take back the phony bill but was unsuccessful. He expressed remorse that his manager had gotten the police involved after he saw Floyd on the ground with Chauvin on top of him.

Chauvin faces charges of second- and third-degree murder as well as second-degree manslaughter. Floyd’s death kicked off a summer of protests and rioting that continue in some parts of the US.