Home / WORLD / George Floyd-inspired ‘inclusive’ lingerie? He’s certainly not who I want to think of when I buy new knickers

George Floyd-inspired ‘inclusive’ lingerie? He’s certainly not who I want to think of when I buy new knickers 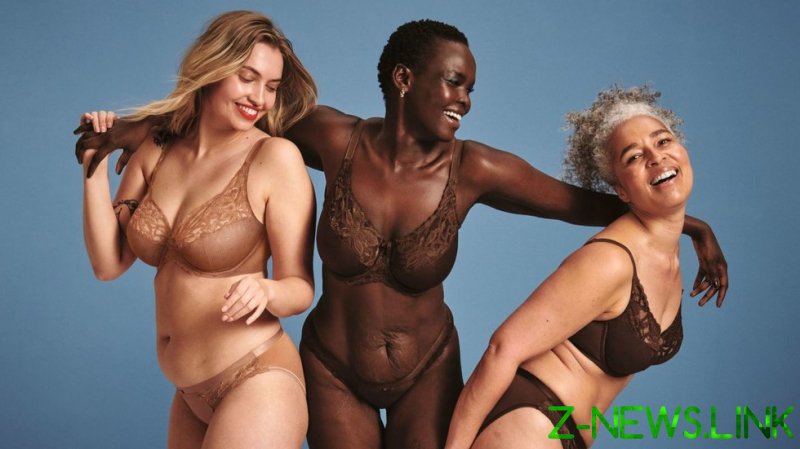 High Street favourite Marks and Spencer has a new range of lingerie in stock. Nothing surprising about that – after posh ready meals, underwear is what M&S does best. But these are not just knickers; these are anti-racist, inclusive, George Floyd-inspired knickers.

No, this is not satire. A spokesperson for the chain store said the idea for expanding its neutral underwear range to encompass a wider range of skin tones emerged from “the global conversation on racial inequality following the horrific death” of Floyd in Minneapolis last year.

People around the world watched the excruciating footage of police officer Derek Chauvin pushing his knee onto Floyd’s neck for an agonising nine minutes and 29 seconds. Chauvin stood trial for his actions, and was convicted earlier this year. Floyd’s death sparked protests held under the banner of Black Lives Matter, and raised broader questions about racism and police brutality.

These are incredibly serious issues. But we need to ask: what on earth has all this got to do with fancy lingerie? How did designing women’s underwear move from what looks nice and feels comfortable to “global conversations on racial inequality?” Don’t get me wrong. When it comes to buying knickers, I’m as keen on having a wide range of colours to choose from as the next woman. I’m just not convinced I want to think about George Floyd while I’m making my selection.

Following Floyd’s death, a plethora of A-list celebrities, multinational corporations, and elite sports institutions rushed to align themselves with Black Lives Matter. As they did so, attention shifted from specific instances of racist police brutality and onto more general messages about the importance of anti-racism. Many of these same individuals and organisations are now seeking to distance themselves from the official Black Lives Matter movement, while retaining many of the same messages and practices.

Over a year after George Floyd’s death, England’s footballers are still taking the knee before matches kick off. This is despite the fact that Floyd did not die in the UK and we do not have the same problem of armed police officers killing citizens as they do in the US. And while we undoubtedly have our own distinctive history of empire and racial injustice, we do not have the same legacy of slavery and racial segregation as in America.

By the Premiership’s own admission, taking the knee no longer has anything to do with either Black Lives Matter or George Floyd. Instead, it has come to be a litmus test to differentiate the morally virtuous kneelers from the allegedly racist sinners. Football fans become a captive audience for elite hectoring. The more they boo, the more it is assumed they need to hear the message.

George Floyd has become the figurehead for a movement that no longer has anything to do with either his life or his death. Instead, Floyd represents a moral enterprise that allows those who head up companies and councils, universities, and sports teams to engage in public displays of virtue. Anti-racism today has become something akin to a religion. Its adherents follow rituals like kneeling and blacking out their social media profiles. They evangelise about books by disciples like Robin DiAngelo and Ibram X. Kendi. And, just as pilgrims were sold atonement through the expensive relics of saints, we are sold diversity with our ice cream, trainers, shampoo – and now lingerie.

In the hands of elite anti-racists, Floyd has been transformed into a saint. He is at once both victim and hero. This is a far cry from reality. With his beatification into the Church of Woke, it is conveniently forgotten that Floyd had been imprisoned on multiple occasions for crimes including theft, trespass and drug offences. He was convicted of aggravated robbery with a deadly weapon after he entered a woman’s home and pointed a gun at her stomach before searching for drugs and money.

Of course, Floyd’s criminal past in no way justifies his brutal murder at the hands of Derek Chauvin. But it should give us pause for thought in our headlong rush to turn Floyd into a cultural icon and modern-day martyr. Floyd’s face now adorns murals in countries all around the world. His name is now being used to sell us knickers.

Personally, I prefer my lingerie to come without a side order of virtue signalling. But if underwear must now be inspired by black role models, I’d far rather think about black women from Michelle Obama to Beyonce, from the UK’s own Kemi Badenoch to Naomi Campbell, than have in mind George Floyd while I’m browsing the Marks and Spencer bra department. Floyd was not a role model and he should not now become a martyr. The long and noble fight against racism is besmirched by having Floyd as a figurehead.