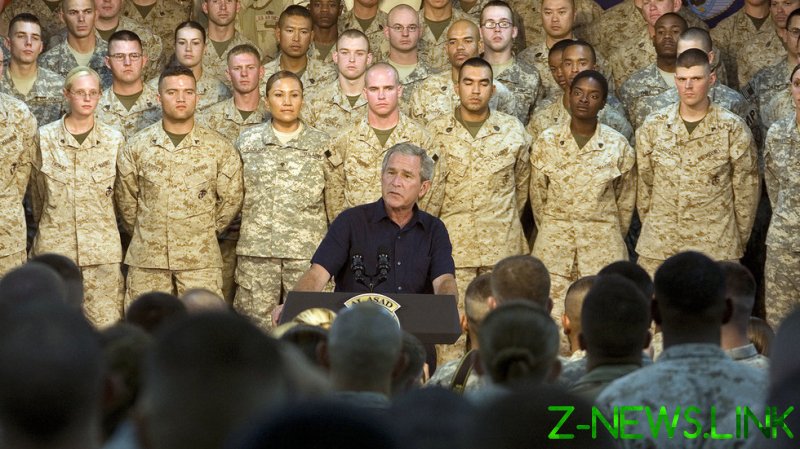 Former US President George W. Bush made an embarrassing gaffe, perhaps a Freudian slip, when speaking on the importance of democracy and threats to democracy from abroad, and taking aim specifically at Russia.

“Russian elections are rigged,” he said. “Political opponents are imprisoned or otherwise eliminated from participating in the electoral process. The result is an absence of checks and balances in Russia and the decision of one man to launch a wholly unjustified and brutal invasion of Iraq. I mean of Ukraine.”

Then Bush brushed the mistake aside and said, “Iraq, too,” insinuating that Russia was somehow involved in Iraq – which is obviously not true.

In any case, simple mistake or not, it is the most perfect example of the outright hypocrisy of US politicians who call out Russia’s incursion into Ukraine. Bush himself launched an illegal invasion of Iraq in 2003 that resulted in the estimated deaths of over 1 million Iraqis in the first several years alone. 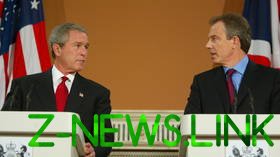 All told, the war ended up being a bloody nine-year operation under the false pretense of ‘weapons of mass destruction’ supposedly held by then-Iraqi leader Saddam Hussein. US forces openly committed war crimes, including the use of illegal chemical weapons, the killing of tens of thousands of civilians by US forces, as well as the widespread use of torture. All of these transgressions were either confirmed by the US or admitted in internal documents leaked by WikiLeaks.

The fact that the man who presided over this horrible war – the war that drew the largest protests in human history – has the nerve to call out Russia’s actions in Ukraine is a display of narcissism. It’s so clearly ridiculous that even he himself let it slip that, yes, what happened in Iraq was a travesty.

What makes this travesty even more apparent is exactly what he was saying about Russia, that “one man” can launch a military operation without checks and balances. That is exactly what happened during the Iraq War. There are international laws and institutions designed to prevent these types of crimes from happening – all of which were ignored. This proved that international law is not the law as such, but merely a political tool to manifest the desires of one hegemon, i.e., the United States of America.

It is precisely this situation, this breakdown of international law and the resulting sense that international law does not actually protect anyone, that created the conditions for the situation in Ukraine. Prior to Russia’s intervention in the conflict, which had actually been ongoing since 2014, Moscow sent its legitimate security concerns – including about the militarization of Ukraine and the potential for Ukrainian NATO membership – to the West, but they were all ignored. 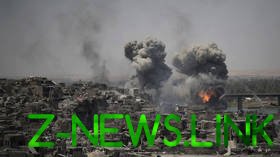 Ironically, it’s again Bush who began the approach of patently disregarding Russia’s interests. After the fall of the Soviet Union, there was hope that Russia could become a partner with the West, not an enemy. When Russian President Vladimir Putin began his first term, that was a hope that he himself shared.

In fact, as Russia was dealing with terrorism in Chechnya, President Putin wanted to partner with the US in counter-terrorism operations. He pledged support for the US in its own efforts against terrorism, including in Afghanistan, offering the use of Russian airspace and other resources.

He met for the first time with Bush at the latter’s Texas home in 2001 just after the 9/11 terror attacks. At a local Texas high school, Bush described Putin as “a new style of leader, a reformer…, a man who’s going to make a huge difference in making the world more peaceful, by working closely with the United States.” Then just weeks later, Bush withdrew from the Anti-Ballistic Missile Treaty in order to, the administration said, protect NATO allies from a potential Iranian missile attack. Putin said publicly that this move would undermine arms control efforts and weaken European security.

Such duplicitousness has essentially remained the norm in Washington ever since. The Americans assure world leaders that they want to cooperate, build ties and reduce tensions, but then immediately enact policies that contradict their own words. Over the course of Putin’s leadership, which has overlapped with several US presidents, Russia has endured successive waves of NATO expansion that has encroached right up to Russia’s doorstep and militarized Russia’s neighborhood – despite verbal promises that this would not happen from, ironically, President George H.W. Bush, the father of George W. Bush.

George W. Bush thus clearly has no ground to stand on when it comes to illegal invasions and a lack of checks and balances on foreign policy. Bush’s having even ventured a censorious opinion of Russia’s actions in Ukraine is irony enough — the Freudian slip is merely that irony in all of its distilled clarity.