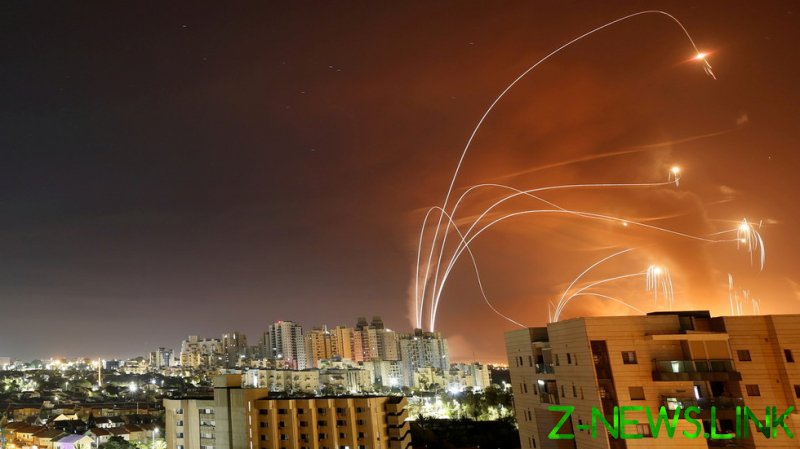 The Israeli military reported a flurry of strikes on the Palestinian enclave on Tuesday night, targeting what it said were Hamas sites in Khan Younis, Gaza City, Zeitoun and Shuja’iyya, including rocket launch installations, “research and development complexes” and the homes of several commanders. It shared footage of one air raid, saying it struck a “multi-barreled rocket launcher” in Khan Younis, Gaza’s second-largest city.

The strikes, which also reportedly targeted Rafah, a city in the southern Gaza Strip, killed at least one woman and injured eight others, Gaza health officials said in a statement. Local reports suggested the woman died of a heart attack during the bombardment, which involved dozens of airstrikes, according to Palestinian journalist Rushdi Abualouf.

Hamas, the political party and militant group that has governed Gaza since 2006, said it fired rockets at six IDF air bases in southern and central Israel on Tuesday, according to the Times of Israel. The group said it targeted the Hatzor, Hatzerim, Nevatim, Tel Nof, Palmachim and Ramon air force bases, though there were no reports of damage or injuries.

Rockets were also fired toward the cities of Ashdod, Ashkelon and Beersheba, according to Haaretz and Reuters, while the IDF claimed approximately 270 projectiles had been launched from Gaza throughout the day, some falling short within the territory.

Unconfirmed footage of rocket fire has also circulated online, showing what appear to be several explosives soaring through the night sky, as well as interceptions by Israel’s Iron Dome missile defense system.

At least 213 Palestinians, including 61 children, have been killed since the latest bout of violence erupted last week, as well as more than 1,400 injured, according to the Gaza Health Ministry. In Israel, 12 have died, among them two children, in addition to over 500 wounded.

The fighting has driven masses of Palestinians to seek shelter within the blockaded Gaza Strip, many packing into overcrowded schools, with the UN warning that some 52,000 people have been displaced. Around 450 buildings have been destroyed or severely damaged by Israeli strikes, including six hospitals, nine health clinics and Gaza’s primary Covid-19 testing and vaccination site, the UN’s humanitarian agency said.

While Israeli media previously reported that Hamas and Tel Aviv were nearing agreement on a ceasefire, a senior Hamas official, Izzat al-Rishq, later denied any such deal, saying that “no agreement or specific timings for the ceasefire were reached.” He added that negotiations led by the UN, Egypt, Qatar and other nations were ongoing, however.

Calls for a cessation of hostilities have grown louder in recent days, with US President Joe Biden endorsing the idea in concept, despite repeated and vocal support for Israel’s operations in Gaza. Though Egyptian mediators reportedly met with their Israeli counterparts to discuss a “humanitarian truce” last week, sources cited by Al Arabiya said their offers were rebuffed.

‘Terrorists on both sides’

Over nine days of fighting in Gaza, serious unrest has also erupted in Arab-Israeli communities, seeing riots and clashes between rival demonstrators and security forces throughout the flare-up. Meeting with the mayors of Lod and Ramla on Tuesday – cities with large Arab populations where civil strife has been especially intense – Israel’s police commissioner Kobi Shabtai said that “terrorists from both sides” were responsible for the bloodshed, enraging local right-wing leaders.

“From my perspective, anyone who was involved in the riots in the mixed cities is a terrorist,” Shabtai said, while vowing to bring violent “extremists” to justice and transform mixed communities into a “symbol of coexistence between Arabs and Jews.”

The comments were quickly condemned as “outrageous” by Public Security Minister Amir Ohana, a member of the right-wing Likud party, who insisted “there is no moral equivalence” between Arab demonstrators and Jewish counter-protesters.

“In order to deal with the problem, one must acknowledge what it is: Arab rioters attacked Jews, police officers and synagogues,” he said. Though Ohana added that “the few who attacked Arabs will also be dealt with severely,” he nonetheless maintained “there’s a long way from that to saying ‘both sides.’”

According to Israeli broadcasters, Shabtai also met with Prime Minister Benjamin Netanyahu for a briefing on Tuesday, where he reportedly criticized far-right activists for inflaming tensions, including members of Lehava, a militant Israeli group opposed to intermarriage between Arabs and Jews.

Lehava counter-protesters were also seen at recent demonstrations in Jerusalem, where thousands of Palestinians rallied against looming evictions of Arab residents of the city. Those protests served as a flashpoint for the current round of fighting, with Hamas firing its first rocket volley last week after Israeli security forces cracked down on the gatherings, including at Al Aqsa mosque, among the holiest sites in Islam.