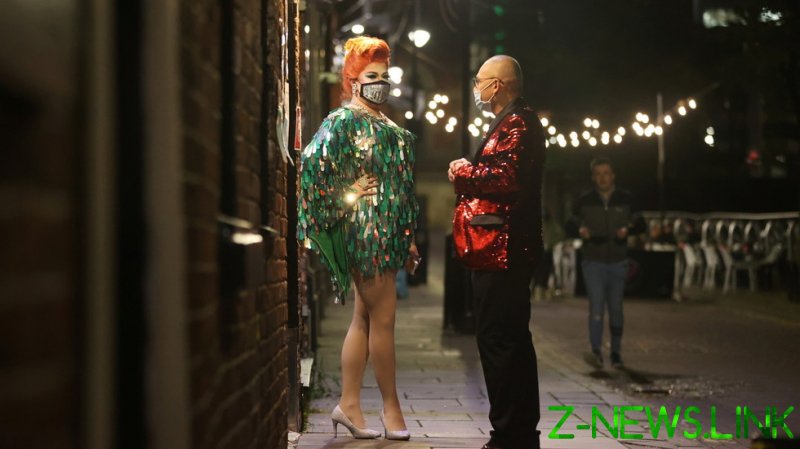 Canal Street is the beating heart of Manchester’s gay scene, and has been for decades.

I worked just across from the street at the time, and nobody was particularly upset or offended at the graffiti. Gay folk were not put out; in fact, that it took a little while before anyone was bothered enough to even clean it up. Back in those days, it would have taken a very brave or very stupid person indeed to express any kind of homophobia around those parts. The guys who frequented the area were more than capable of taking care of some idiot with a spray can.

Canal Street was probably the best place in the city for a night out, too, gay or straight. And Manchester in general was seen by many as an example of what a gay-friendly city should be like, the way an integrated and inclusive community could work and thrive to the point where sexuality was not even all that relevant. At least in certain pockets, such as the ‘gay village’ around that party street.

Live and let live, and all that.

Not so today, it seems.

Manchester city council has just backed “a first of a kind” £20-million development for older LGBT+ people to live in a“safe and vibrant” environment. That, of course, implies that these folk need to be separated out in order to feel “safe and vibrant” in the first place.

The project has been backed by the LGBT Foundation, a charity that advises the myriad of communities within those four letters. It’s hoped the project will lead to other such schemes across the country. Paul Martin, the Foundation’s CEO, says: “Everyone deserves to have access to safe, affordable housing where they can be sure they feel secure and welcome.

“Many older LGBT people have grown up in a world hostile to their identities, and are worried about their future, particularly if they are likely to require care in later life.”

There are already restored old red-brick buildings not far from Canal Street occupied, predominantly, by generally well-off gay men. These are folk who want to live near the place where they like to hang out. They didn’t need the council to step in, nor anyone else’s help at all for that matter, apart from maybe their bank manager to get a mortgage.

This new scheme is aimed at not-so-well-off over-55 LGBTs and consists of 100 apartments of affordable housing to be erected in the leafy Whalley Range suburb to the south of the city, a couple of miles from Canal Street.

Iain Scott, a 62 year-old gay man who lives in Manchester with his partner of some 40-years, runs an LGBT website in the city, focused on the Canal Street ‘gay village,’ and he is a supporter of the new initiative.

“What we all know is that, politically and socially, the LGBT community has seen a major drive forward over the last 20 or 30 years,” he told RT.com. “And almost every week there’s evidence of some new initiative and I think housing fits in with that.

“There are obviously LGBT people who live good lives, have partners and their own homes with a garden and a conservatory – good jobs, pensions, nice holidays. All of that. But, inevitably, there are also people who feel isolated and have no partner and aren’t economically well-off.”

There is also, of course, a market for these properties and developers recognise that housing specifically targeted at LGBT+ people is a pretty damn good investment. Catering to the ‘pink pound’ they used to call it, back in the mildly less-liberal 1990s. There are reckoned to be over 7,000 LGBT folk aged over 50 living in the city, and that market is sure to to grow.

The Manchester project follows the announcement that the “first retirement community celebrating LGBT+ people” will open in London  this summer, with 19 flats available on a shared-ownership basis.  It’s believed that the first retirement home in Europe for LGBTs opened – where else? – in Sweden back in 2013

“I think these things are largely positive and realistic,” said Scott. “We live in a non-ideal world. Anything that can bring people together safely is a good thing, a positive thing. There’s a guy I know, for example, who’s 90 and lives in a gay-friendly block. For people like him, living somewhere filled with like-minded people can make one feel safer, happier and more comfortable.

“Even in these enlightened times, there’s still homophobia and transphobia and there are people out there who would wish to do these people harm simply for their orientation. The wider community, yes, they have precisely the same issues. But they don’t have the added problem of ‘straight-phobia’.”

Fair enough. But the Manchester project, paving the way for many future schemes, does kind-of beg the question; if a straight guy wanted to build housing for only straight men, excluding all others, would he get the go-ahead? Unlikely. There would be a rich array of laws that would be thrown at him to stop his plans ever leaving the drawing board. But for LGBTs? That’s different.